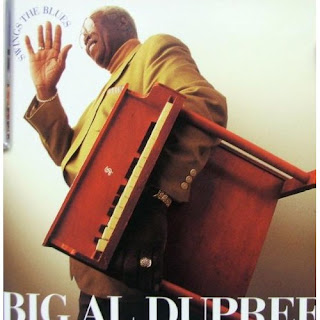 Big Al Dupree was born in Dallas in 1923, and started playing piano and saxophone in his early teens during the 1930s. After going to college in New Orleans, he developed his jazz and blues styles on the piano and saxophone, and became a noted singer. Dupree collaborated with blues and jazz legends such as T-Bone Walker and Pee Wee Crayton, touring throughout the 1940s, and brought his solo stylings to piano lounges and supper clubs around his native Dallas
in the 1950s. Although Dupree had been a mainstay of the vibrant jazz and blues music scene in Dallas for over fifty years, he didn’t release any albums of his own until 1994. View From the Balcony was followed by Big Al Dupree Swings the Blues in 1995, and finally, Positive Thinking in 1999. Big Al Dupree died on August 4, 2003 of a heart attack. He was 79.