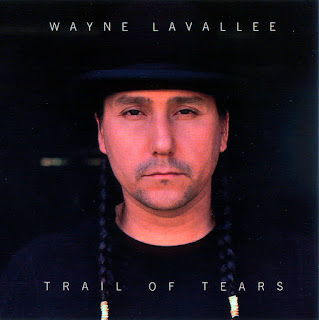 From a home base of acoustic folk roots, Wayne Lavallee roams from blues to rock to Native chanting with a sense of artistic freedom that transcends easy classification, leaving one with the distinct sensation that they’ve just crossed paths with an unusual singer-songwriter. He released the Canadian album Trail of Tears in 2010 through Outside Music, which garnered him a 2010 Juno nominee & winner for “Best folk acoustic album” “Best rock album” & “Best male artist” at the 2010 Canadian Aboriginal Music Awards. Wayne continues his ever-growing presence as one of the most significant songwriters and storytellers for his generation. Wayne is from the Cree/Metis Nation; born in Vancouver, B.C. At the age of five Wayne received his first guitar & discovered his passion for music and singing. Through the influence of his Native culture, music and theatre, Wayne began to tour nationally as a singer/songwriter and actor. His dedication and passion for touring & live performance are the foundation for his emergence as an artist to watch out for. The unique fusion of Wayne's folk/rock acoustic style with traditional Cree chanting has made this west coast artist an in demand performer and travels have seen him opening up for artists such as Academy/Juno award winning musicians Buffy Sainte-Marie, Susan Aglukark, Kashtin and many more. The fusion of his folk/rock acoustic style with traditional Cree chanting makes his work unique, fresh and innovative.