Clare Free - Where Are You Now? 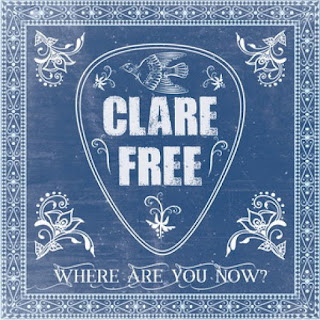 Sublime blues guitar songstress, Clare Free, is back after seven years with a brand new album, “Where Are You Now?”, to be released on March 6th, 2020.Having taken a break from recording to raise her youngest child, “Where Are You Now?” is her first release since her acclaimed “Dust and Bones” album in 2012.And the production team behind the new release reads like a who’s who of the modern music industry, including Richard Flack, Bob Kidby & Frank Arkwright.
Clare explains: “I went for lunch at the Old Jet Arts hub which is run by Jesse Quin of Keane. While I was there, I met the massively acclaimed music producer Richard Flack. Richard is Robbie Williams’ producer, and he also works with other huge artists including Tina Turner, Olly Murs, Rudamental, the Spice Girls, Pulp, Stereophonics, INXS the list goes on and on. We got chatting and I mentioned to Richard that I wanted to record a new album. When I spoke to him a couple of weeks later, he said he would be interested in producing and mixing it as long as we worked well together, and he invited me into the studio to do a trial song to see how we got on.We went to the most amazing studio called The Barn, which is run by Bob Kidby who co-produced and engineered the album.  The studio is over two floors and is jam packed with an astonishing array of mint condition vintage gear. Every guitar, amp, effect pedal, and instrument you could dream of is there, and I was allowed to use any of them that I chose. I used vintage Telecasters, Stratocasters and Les Pauls mostly, and some much more ‘off the wall’ guitars too.  I was in heaven! The test track went well, and we all enjoyed working together, so Richard said, if I could fit in the recording in the days he had between flying back and forth to LA etc we could do it. I jumped at the chance and what an opportunity it was!  Working on the album with Richard was fantastic, and Bob’s engineering skills are second to none.  They got the absolute best out of me. I was lucky enough to have Jamie Kruppa join me on bass, I’ve worked with Jamie before and he’s a great bass player.  On drums we had Dave Jackson, who is a phenomenal session player.Once it was all mixed, I asked Cenzo Townshend (Engineer Of The Year - twice) if he would master the album, he told me he doesn’t do mastering, but that I should contact his mate Frank Arkwright at Abbey Road as he would do a good job of it for me. So, naturally, I contacted Frank, who masters for the likes of Coldplay, U2, Oasis, Snowpatrol, Bryan Ferry, Biffy Clyro and loads more. He did the mastering for me and wow, the album sounds absolutely amazing. I am so, so proud of it. I have had the opportunity of a lifetime, and I feel so lucky to have had that chance”. “Where Are You Now?” was recorded at The Barn Studios. Suffolk. The album was produced and mixed by Richard Flack, engineered and co-produced by Bob Kidby and mastered by Frank Arkwright at Abbey Road Studios.