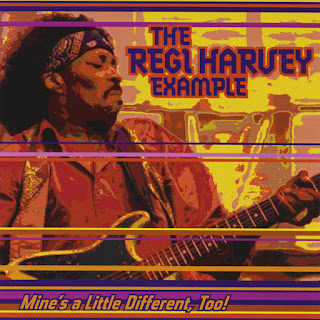 Very Hendrixy!Drum, guitar, and voice are the tools used by Regi Harvey to communicate the true soul and expression of his creative vision, musical telepathy if you will. Regi is a multi-instrumentalist (guitar, drums, bass, and keys), a singer, and a songwriter. He is an experienced player who’s depth and creativity has grown over the years. In 1968, Regi Harvey formed his first band, Straight Phonk/Stratus, which played shows with The Chambers Brothers, Larry Graham, and B. B. King. In 1976, Regi lived in London and recorded with Steve Winwood on Stevie’s first solo project. He returned to the U. S. in 1977 to perform with numerous local
and world-renowned musicians. From 1979 to 1990, Regi spent much time with brothers Chris and Doni in the band “Harvey,” one of the premier hard-rock metal groups in the Bay Area. They produced four records, played all the major clubs and performed on mini-tours as support for several artists including, Eric Burdon (The Animals),
Buddy Miles, Y&T, and Living Colour. Currently, Regi is recording and producing a number of projects with Thunder Blue (Blues-Rock band), The Regi Harvey Example (a Metal-Blues band), and The Lab Rats (Jazz). Today, Regi considers himself a confirmed “Blues man
with the soul of a rocker”.