Pete Anderson - Even Things Up 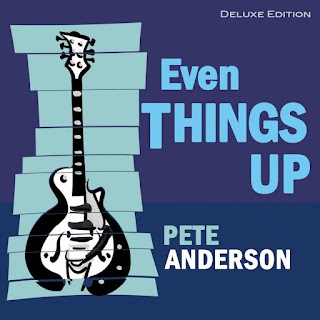 It's been over ten years since Anderson put out an album featuring his vocals. He's a more melodic singer now, with a fluid soulful tone. Even Things Up is also a return to the blues-rock sound that he showcased on Working Class, his first solo effort. "Honky Tonk Girl" kicks things off with Anderson's big, twangy guitar perfectly straddling Chicago blues and California country swing. His punchy solo keeps the chooglin' beat rollin' down the road like an out of control semi. "That's How the Trouble Starts" has a smoky Latin backbeat and features backing vocals by Maxine Waters. On the ballad "Still in Love," Anderson shows off his power as a vocalist with his understated passion. The acoustic "Prophet for Profit" features Anderson's impressive blues harp work and a sarcastic lyric that takes those who preach for gold and not a soul to task for the damage they do. The instrumental tracks here are also tasty and show off Anderson's commanding guitar prowess. "Booker Twine" shows of his jazzy side with the big B-3 of Michael Murphy riding shotgun, "Wes' Side Blues" is a samba with Anderson's reverb-heavy guitar floating above the breezy tropical beat, while "Dogbone Shuffle" is another hard-charging honky tonk blues number goosed into high gear by Jeff Donovan's drums and the horn work of Lee Thronburg and Dave Woodford. [The album was re-released in an expanded Deluxe Edition in 2010 when Vizztone took over distribution of Anderson's Little Dog logo. Bonus tracks include a version of "Still in Love" with Bekka Bramlett singing lead, and live versions of the Anderson classics "Working Class" and "Feels Like Mississippi."]