The Bihlman Bros. - What U Want 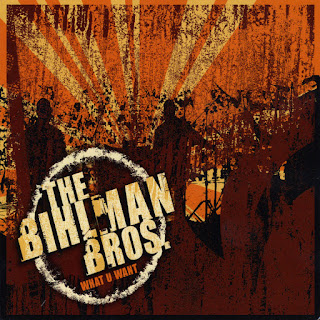 Soulful, bluesy, hard rock with hooky tunes you'll be singin' all day. If you're a big Air Supply fan, this ain't for you!
EMMY AWARD WINNING Bihlman Bros. ROCK! Founding members and brothers, Jabo (Jay-bo) and Scot “Little” Bihlman are the driving force behind this bluesrock juggernaut, and take it to the stage in full force. From Chicago’s Tweeter Center and House of Blues to Van Andel Arena, Lisbon’s CCB and The White House(yes that white house), the Bihlman Bros. have appeared with ZZ Top, BB King, Ray Charles, Buddy Guy, Ted Nugent, and many others.
3 songs from the new album "What U Want" were included in the Amy Smart/Billie Zame/Betty White movie "Love and Dancing" currently in theaters nationwide.
After completing several European Tours with Chicago blues legend Son Seals, Seals asked the Bros to join him and Phish guitarist Trey Anastasio in the studio on a souped up version of the Son Seals classic “Funky Bitch”for his “Lettin’ Go” CD which won a WC Handy award. Their music has appeared on Radio, Films and TV includingNPR’s All Things considered, and All My Children on ABC. After a 3 year hiatus during which time Little followed his acting jones and appeared in commercials for Burger King, Volkswagon and the NFL and Jabo won 3 EMMYs for scoring TV documentaries, the Bros. are back with a brand new album recorded at Cherokee Studios in Hollywood. They were the last band to ever record at this famous studio. Check out the video below for a short new story on the sessions!
The Bros have worked with Grammy winning producer Jim Gaines (SRV, Journey, Santana), Robert Bradley, Kenny Olson (Kid Rock), Son Seals, Trey Anastasio, John DeFaria, and many others. The Bros. are faculty members at The National GuitarWorkshop, WorkshopLive, and Interlochen Center for the Arts. Be on the lookout for Jabo's new National Guitar Workshop/Alfred book "Easy Soloing for Blues Guitar" out December '08! }