Frank Biner - Time To Move On 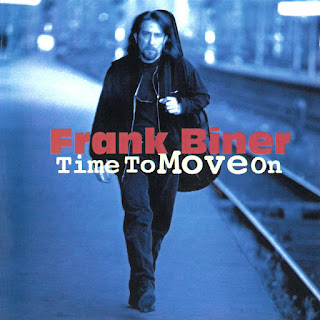 Frank Biner was well-known in the San Francisco and Oakland, California area as a powerhouse vocalist, guitarist, and songwriter of the highest caliber. Frank passed away unexpectedly in May of 2001 and is greatly missed by his many friends and fans. Frank was born in Milwaukee, Wisconsin, where he learned to play the guitar. The Biner family relocated to Evanston, Illinois in 1965. Frank began his entertainment career in 1966 in Chicago working with the The Little Boy Blues, a legendary group of those hallowed times, opening shows for various acts coming through town. He migrated to the San Francisco Bay Area in the late sixties where he met blues legend, Mike Bloomfield, formerly of the Butterfield Blues Band and The Electric Flag. Like many a visiting midwesterner, he found the atmosphere and climate so appealing that he determined never to leave. As early as 1971, Frank was working various nightclubs and KSAN Radio's "Live Performance" with Bloomfield. On arriving in the Bay Area, Frank quickly established himself in the East Bay Funk scene, with regular gigs at the Long Branch and Keystone, clubs that were then in their prime and serving up a rich variety of fresh talent. Here he shared many a booking with the likes of Tower of Power, Eddie Money, and Clover (featuring Huey Lewis), and also began his long and fruitful collaboration with Stephen 'Doc' Kupka and Emilio Castillo of Tower of Power. This netted him three songs on the Tower album "In The Slot," and two more on the next Tower album "Ain't Nothin' Stoppin Us Now". Frank also sang background vocals on both of these LP's. This highly-anticipated project holds special meaning for Stephen 'Doc' Kupka, who co-wrote many of the songs with Frank Biner and Emilio Castillo. Doc Kupka was also heavily involved in the original recording of the songs and co-produced the project with Frank. The songs were tracked during recording sessions at Kensington Sound Studios in 1982 in Toronto, Ontario with many great Canadian musicians and special guests, but were never released. These tracks are from the original sessions, with fresh new mixes, provided by Rick Duncan of Nacnud Studios and Steve Yelick of Coastside Recording, and mastering by Brian Hijos. Chuck Hansen served as Executive Producer for the project. THE LIFE AND TIMES OF FRANK BINER is a co-production of Strokeland Records and House of Hansen Productions, LLC. For more information, please see the Strokeland Records website at www.strokeland.com.