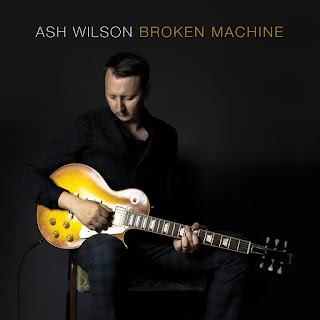 Wilson Brothers Music in association with Cadiz Music Distribution are pleased to announce the release of singer-songwriter and guitarist Ash Wilson’s debut album “Broken Machine” on Friday 21st April 2017. Lincolnshire's Ash Wilson is one of England’s most distinctive vocalists, guitarists and songwriters in contemporary blues music today. The debut album entitled “Broken Machine” is a watershed achievement for Wilson, both in terms of the many musical styles in the tracks, which begin and end with the blues at its core. With the explorations and growth of him as a singer, songwriter and guitarist the album has resulted in spiritual growth expressed through the medium of his music. “Broken Machine” sees Ash working together with his brother Phil Wilson, who whilst drumming on the entire album also produces, mixes and co-writes the material on the debut album. “Broken Machine” features the outstanding talents of bassist Roger Inniss (Chaka Khan, Laurence Jones), keyboardist Bob Fridzema (King King, Dana Fuchs), plus very special guest guitarist Jesse Davey (The Hoax) who plays on the “The Hitcher”. The album is maybe best described by multi award-winning UK Blues Hall Of Fame inductee Wayne Proctor, (King King, Ben Poole, Stevie Nimmo), as “A fine record that grooves, rocks, twists and turns... You're all gonna love it! Now grab a cuppa, press play and turn it up! LOUD!!”...