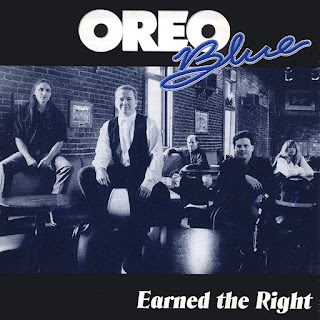 Blues soul with the polish of Robert Cray, and the grit and feel of Bonnie Raitt.
"Earned The Right" by Oreo Blue First, I must say I am impressed. The production values on Oreo Blue's self-produced first recording, fittingly named "Earned The Right" is first class. An A-1 production from the packaging to the recording itself. Recorded and mixed at Omega Sound in Ft. Smith, its just goes to show what can be done here in the hills. The song list ( all Oreo Blue originals ) includes two titles credited to the group, four y band member Brian Crowne and associates, and three by the newest member of the group, Gary Hutchinson. Each song merits recognition. Especially noteworthy are the title tracks, the bluesy "She Exudes the Blues" and the hauntingly beautiful "Tell Me What You Need". One of Fayetteville's favorite blues acts, Oreo Blue has indeed earned the right over the past few years even though they have experienced some personnel changes. Chris Payton's heartfelt vocals bring your soul right up into your throat. She is definitely the heart and soul of this act. Drummer Mike Lovelady is the glue of the group and bassist Rod the beat of the band. Hutchinson, one of the area's hottest blues guitarists adds power to the set that sends the message home. Last, but not least, vocalist, saxophonist and guitarist Brian Crowne is Oreo Blue. His vocals and sax attacks always bring out the crowds when the group plays local venues.