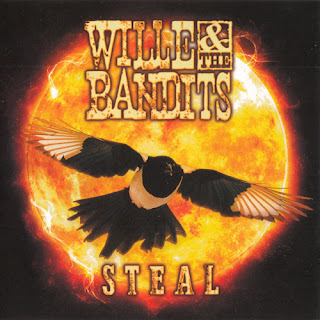 With three self-released albums to their name, hardworking three piece Wille And The Bandits have built a reputation way beyond their Cornish roots, with extensive touring, including with the likes of Deep Purple, Quo, and Bonamassa through to the John Butler Trio, honing their skills. By their own admission their last release Grow (2013) was perhaps a little too diverse, but the band – who Get Ready To ROCK! photographer Simon Dunkerley described as one of the best acts he saw in 2014 (and he saw a few) – look set to put that right with Steal – a stomer of a blues /rock album harking back to formative days of the genre. With a modus operandi based around the ethos of Cream and the Jimi Hendix Experience, the album was recorded ‘live’ on analogue tape at The Grange Studios in Norfolk using 1950/60′s equipment, and while I’ve heard other bands of the genre adopt a similar tack, few – in my opinion – have achieved such refreshing and dynamic results. There’s a real vibrancy throughout the set that, without shifting from the band’s core ethos moves effortlessly from hard to soft, and from acoustic to electric.  Guitarist/singer Wille Edwards’ lap steel works adds a rootsy feel, and his vocals have a wonderful ‘period’ coarseness and urgency. The material is uncomplicated, and works all the better for it.  Yes, there’s some infectious soaring guitar work on the opener ‘Miles Away’, but what it makes it work is it’s a great song.  And yes, the band may be time locked (‘Hots Rocks’ perhaps not unsurprisingly has a Stones groove, as does ’1970′ – an epitaph to the era), but a well written song will transcend the decades and Steal is packed with them. Matt Brooks’ bass (six string electric and five string double) is frequently used to carry the melody to striking effect, and together with Andrew Naumann (drums, djembe and congas) the pair are equally capable of providing a steam hammer rhythm to underpin a monster riff, as on ‘Atoned’, or adding shade and colour like on ‘Scared Of The Sun’ – a beautiful song that balances power and poise, and the pièce de résistance – ‘Crossfire Memories’ - which evokes shades of Robbie Robertson in its uplifting chorus. What perhaps singles Wille And The Bandits out from their contemporaries is their willingness to experiment – an element at the very epicentre of the blues/rock explosion, with Wille adding weissenborn and dobro to the melting pot.  The result is an album that feels organic and unrestrained.  No over indulgence and no unnecessary frills, just great songs delivered from the soul. There’s just not enough of that these days.