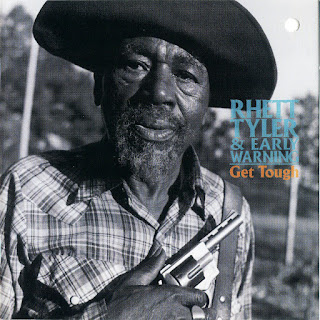 Rhett Tyler, guitarist, songwriter, vocalist, and producer, is best known for his explosive style of scorching modern blues guitar and high-octane, house-rocking live performances.
Born in San Antonio, Texas, and raised in Mississippi, Ohio, and St. Louis, Rhett grew up listening and learning about music and the blues from his father, an Air Force officer and talented classical, boogie, and blues pianist, and about writing from his mother, a published poet. He discovered his own God-given musical talent at the age of 15 when his parents gave him his first electric guitar.
Rhett attended both Mannes College of Music (he had been accepted by Juilliard, but there was no guitar program) and the Berkley School of Music in the early 70s, where he feverishly worked at honing his skills as a player, performer, and writer. He soon found himself on tour as bandleader for R&B recording artist Ruth Copeland that climaxed at the Baltimore Civic Center, where Rhett received a standing ovation for his electrifying featured guitar solo. During the latter part of the 70s and early 80s, Rhett had the pleasure of working with a range of notable artists on numerous projects both live and in the studio.
In the mid-80s Rhett formed the band, Early Warning. After undergoing a period of stylistic exploration and soul-searching, he brought the band's focus back to his first true musical love, the blues. His music is certainly rooted in the tradition of blues, but Rhett also incorporates his jazz, rock, and gospel influences to create an innovative modern musical bland with his signature guitar style.
Rhett Tyler has independently recorded and released three CDs with Early Warning, "Total Package" in 1992, "My Passion" in 1997, and most recently, "Live at Manny's Car Wash" in 1999. Two of these recordings have been licensed to the German-based Herman's label for European distribution. "Total Package" was released in Europe as "Get Tough" in 1996 and "My Passion" was released under the same title in 1998.
Rhett has performed at many prominent festivals and venues, including the Mississippi Valley Blues Festival, Davenport, IA, Fleet Blues Fest, Albany, NY, Jersey Shore Jazz & Blues Festival, Redbank, NJ, and Treasure Coast Food Bank Blues Festival, Ft. Pierce, FL. He has also shared billing with many distinguished blues artists, including Johnny Winter, Lonnie Brooks, Elvin Bishop, Delbert McClinton, and John Hammond, to name a few.