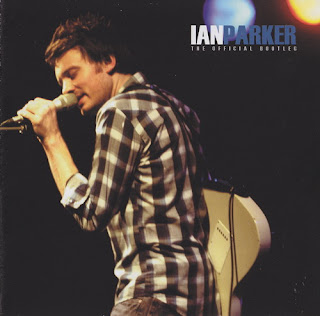 The Official Bootleg' captures some of the highlights of Parker's 2007 UK tour. Ian and his band were touring his Where I Belong album, a blues project inspired by a working visit to Mississippi in 2005 which re-ignited his passion for this charming art form. As such the material on this album is more blues-rock than his early releases or indeed his latest more roots singer-songwriter material, a career pattern somewhat akin to his US counterpart John Mayer.
That said, the album is characteristically varied and showcases his writing as well as his emotive playing and bitter-sweet singing style. The album received high critical acclaim at the time of release, and undoubtedly captures a band at the top of their game. Don't let the title worry you, it is merely a tongue in cheek response to the numerous Ian Parker bootlegs doing the rounds on the internet, there is nothing 'bootleg-ish' about this wonderfully produced album.'
A songwriter genuinely literate, sometimes almost literary, Ian is an original craftsman. Expressed through a distinctive bitter-sweet vocal delivery, Ian's songs hold nothing back. His ability and willingness to share with his audience, naked honesty and genuine emotion, is what sets him apart.
He has also developed a distinctively expressive guitar style, which perhaps explains his ever-growing popularity in the blues world, but the truth is he isn't a blues artist. Roots music continues to form the foundation of his sound, but there are no boundaries in place at this point in Ian’s artistic journey, and the emphasis lies firmly on entertaining everyone present, not just the guitar fans.
Ian’s career took off in the summer of 2003, when he signed to Ruf Records following a personal introduction to US record producer, David Z (Prince - Purple Rain). His debut album 'INSIDE' (Ruf1094) was released in October of that year.
In March 2004, Ian appeared on Germany's top live music TV show, 'Rockpalast'. and a live DVD of his incendiary performance was released in June 2005, entitled '…WHILST THE WIND' (Ruf3007). In addition, a live album documenting Ian's performance in Hannover during his December 2004 European Tour, was also released in June 2005 under the same title (Ruf1102). Both releases met with high critical acclaim and continue to notch up impressive sales.
In September 2005, Ian wrote and recorded five songs for a Ruf Records project album, 'PILGRIMAGE' (Ruf1112) which was recorded in Clarksdale Mississippi and Memphis Tennessee, and released in January 2006. The release of ‘PILGRIMAGE’, extended Ian's touring activities throughout Europe and importantly, into the US.
On return from America in September 2005, Ian began a lengthy artistic process based around his rediscovery of the roots artists who had inspired him as a teenager. The resulting album, 'WHERE I BELONG' (Ruf1120), was released in January 2007 and produced by Matt Butler, whose extensive CV includes none other than Sir Paul McCartney. The ensuing promotional tour culminated with the recording of ‘THE OFFICIAL BOOTLEG’ (MT006) which captures the highlights of the final UK leg of a gruelling eighteen month long tour of Europe and the UK.
Ian spent much of 2008 writing new material, and at the beginning of 2009, under the management of Ralph Baker of Equator Music, sessions began in Bath's famous Riverside Studios. The resulting five track EP, 'DEMONS AND DOUBTERS' (Equator), was recorded under the guidance and supervision of Clive Deamer (Robert Plant, Portishead, Massive Attack), and Jon Jacobs (who learned his trade with Sir George Martin at Air Studios).
With these songs, Ian has made a subtle but noticeable shift of direction, and is at the beginning of an exciting new chapter in his career. His music remains based in roots, and his signature bluesy guitar licks have not gone away, but the emphasis is now firmly on the songs.