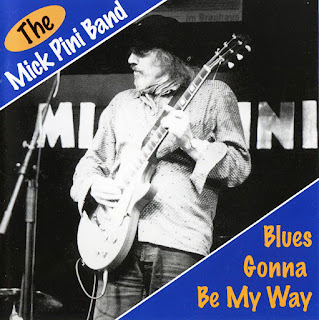 Mick's  long awaited CD has  been  released in good time for his 1999 British tour.  Mick  appeared regularly at venues in the East Midlands until he moved to Germany a couple of years ago, now audiences don't get the opportunity to see this underrated guitar master in action very often, more's the pity!
The CD opens with the instrumental warm-up track 'Avenue 54', featuring Julian Grudgings' hammond organ backing  Mick's  first guitar workout which draws to a close with the mournful guitar solo leading deftly into the  band's  version of Chuck Willis's 'I Feel So Bad'.  Mick's  bluesy vocals  are  complimented by his superb guitar work throughout, as well as the sensitive bass work of Graham Lacey.
Mick  began his musical career around the same period as Peter Green, & his playing  is  at times similar to the former Fleetwood Mac guitarist's, this CD features two Peter Green songs, the third track 'Watch Out'  being  the first. The  band's  version of this classic  is  slower than the original, the pounding drums  are  more laid back here too. Now's probably a good time to mention that Mike Vernon who produced the Fleetwood Mac albums from which 'Watch Out' came has also produced this album some 30 years on, & guested on percussion.
Mick's  music  is  very much in the mould of the  blues , despite the 'Wildman' nickname you won't find him thrashing out  blues  rock, as the title of this album suggests  blues   gonna   be   Mick's   way ! He follows the Peter Green song with B.B. King's 'Woke Up This Morning'
There's a marked charge in tempo for 'Third Degree', soft piano & quietly played guitar provides a solemn background for a song about accusations - the suspect seems resigned to his fate, the third degree tactics claim another innocent man! The song showcases  Mick's  ability not only play flamboyant guitar solos that leave his audiences breathless, but to play those sensitive pieces that have people reaching for their pints! Surely the original Eddie Boyd / Willie Dixon version could have  been  no more haunting than this, just savour that guitar!
There's a cover of Roosevelt Sykes 'Driving Wheel' the abrupt ending comes a bit of a surprise. This  is  followed by the second Peter Green song 'Looking For Somebody' the title of the CD comes from a line in this song.  Mick's  vocals lend themselves especially to this style of blues & here especially his guitar playing  is  remarkably similar too!
'Last Night'  is  an interesting diversion, featuring some evocative harmonica work from an unnamed harp player, this Little Walter song adds to the solemn atmosphere of the CD's mood.  Blues   is  most definitely  Mick's   way , if you enjoy the  blues  as the  blues , this  is  the album for you,
Mick's  own song 'Hard Times' follows, Mike Hellier's fine drumming provides the lively beat, the song seems to cast off the impending difficulties that  are  relayed in the lyrics.
'Like A Road' has a gospel feel, 'turn around, I'll  be  there, like a road leading home' the hard times, the sad times, the  blues  will soon  be  behind you, an uplifting song. There's some fine slide guitar work from special guest Al Sansome & this  is  followed by  Mick's  soulful guitar. Written by Dan Penn & Don Nix, Penn  is  better known for songs such as 'I'm Your Puppet' a hit for James & Bobby Purify & 'Do Right Woman' (Aretha Franklin), whilst Don Nix  was  a member of The Markeys who backed Otis Redding, Wilson Pickett & Sam & Dave. Seemingly a surprising choice for a  Mick   Pini   Band  album but one that works remarkably well!
As we started so we close, with an instrumental, Freddie King & Sonny Thompson's 'Wash Out'. Here the spirit & the guitar flies, & that's what the  blues   is  about, OK times may  be  sad, but through the  blues  the spirit will soar once more. For those not touched by the  blues , this point  is  often missed, the  blues  reflects life, but no-one wants to  be  unhappy all the time, the  blues  music came from people living in a harsh background, but Saturday nights they wanted to Boogie!
As always,  Mick  & the  band   are  in great form on this album, which is only the band's fourth in 10 years, catch them in action at a venue near you during September (see Fizgig  Blues  listings for details), 'Blues  Gonna  Be  My   Way ' will be available at gigs, but if you can't make any of these dates you can purchase a copy from Blumberg Records, 63 Priest Meadow, Fleckney, Leicester. LE 8 8 TZ, cheques for £13.50 made payable to Blumberg Records.