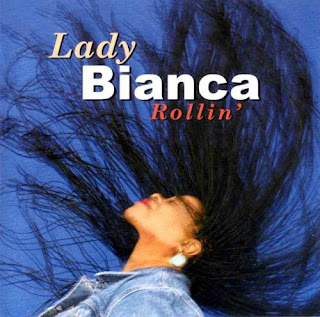 A woman who can sing the Blues with an authentic growl a smooth, seductive contralto and a big, sweet toned range will always be in demand, and West-coast star Lady Bianca fills that bill perfectly. She is not well known around the world, or even across the nation, but her big, rounded voice has been heard behind some legendary performers. Starting her recording career late, Bianca has put down some scintillating Blues on her albums, and continues to move audiences wherever she goes.
Bianca Thornton was born in Kansas City in 1953, where she developed her Gospel tones in Church. Bianca received her ‘enoblement’ at the age of 17, when she sang with Quinn Harris’s band The Masterminds, and ‘Lady Bianca’ has been her enduring performing name. She studied at the Conservatory of Music in San Francisco, and singer Jon Hendricks cast her in the role of Billie Holiday in his production ‘Evolution of the Blues’ at San Francisco’s Off-Broadway Theatre. Bianca married bass player Henry Oden and then joined Sly and the Family Stone as a backing singer and keyboard player. She also toured as a backing singer with Frank Zappa and appeared on his 1976 album ‘Zoot Allures’. When not on tour, Bianca found work on the Bay Area club scene and recorded with artists as diverse as Taj Mahal and Merle Haggard. Van Morrison recruited Bianca as a backing singer for many years, featuring on five of his albums, and she added her talents to work by John Lee Hooker and Willie Dixon.
Her hometown is Oakland, and she has been a mainstay on the bay area's blues scene for many years. Coming from a gospel tradition, she has a strong powerful voice, and also plays some piano. Her blues are traditional style, but there's always a modern edge to them. Well done. LADY BIANCA - voc/pno, CARL LOCKETT - gtr, DAVE MATTHEWS - org, TONY SAUNDERS - bass, DAVE ROKESCH - drums.