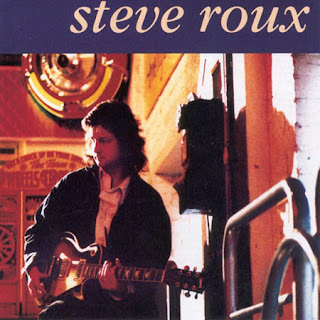 This first album shows the superb style of Steve Roux emerging to one of the best guitar singer of blues this country has ever had.
Based in the south of England, guitarist and vocalist Roux is a member of the White Knuckle Blues Band. This is usually a trio with Robin Vick (bass) and Bernie Fox (drums), but occasionally they add musicians such as Matt Beckwith (harmonica). The band has released two albums, 1998’s Raw Knuckles and 2003’s Can’t Change The Time. In the early 90s Roux played in Germany, appearing on the same bills as Albert Collins, Robben Ford and John Hammond. In the early 00s, he sometimes played with drummer Mark Brzezicki, bass player Steve Brzezicki, keyboard player Josh Phillips and guitarist Damon Hill, the latter formerly a noted motor racing driver. This group was known as Dad’s Army and also as Hill’s band, the Conrods, in which they were joined by vocalist Robert Hart.