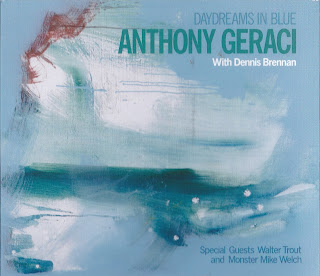 Pianist Anthony Geraci is both a founding member of Ronnie Earl and The Broadcasters, and Sugar Ray and The Bluetones. He has been with the latter band for over thirty-five years. Geraci has been featured on over fifty recordings with both blues pioneers and contemporary artists such as Big Walter Horton, Carey Bell, Charlie Musselwhite, The Proven Ones and Welch/Ledbetter. Geraci also has seven albums of his own.  He fronted a band he called The Boston Blues All-Stars and released 2015’s “Fifty Shades of Blue” which resulted in four Blues Music Award nominations including “Album of The Year” and “Traditional Blues Album of The Year”. His last album 2018’s “Why Did You Have to Go” garnered him six more BMA nominations including another for “Album of The Year”, and one for the coveted “Band of The Year”. He has thirteen nominations overall including five consecutive nods (2016-2020) for “The Pinetop Perkins Piano Player of the Year”. The band on “Daydreams In Blue” includes Geraci, piano; Dennis Brennan, harmonica and vocals; Monster Mike Welch and Troy Gonyea, guitars; Michael “Mudcat” Ward, bass; and Jeff Armstrong, drums. The horn section includes Scott Arruda, trumpet and arrangements; and Mark Early, tenor and baritone saxophones. Additional guests include guitarists Walter Trout and Peter Ward. Produced by Geraci, the album is recorded and mixed by Jack Gauthier at The Lakewest Recording Studio in West Greenwich, Rhode Island. Ten of the twelve tracks were written by Geraci.“This is by far the most exciting recording I’ve done under my own name”. Geraci’s piano opens “Love Changes Everything” with a great vocal from Brennan, a superb horn arrangement, and a guitar solo from long-time band mate Welch (Sugar Ray and The Bluetones). On “Tomorrow May Never Come” Brennan sings “now you’re gone and I don’t know what to say, baby please come back to stay”. “Daydreams     of A Broken Fool” has a Bossa Nova beat and some beautiful piano from Geraci. “Mister” features Brennan on harp. The swingin’ rocker “Tutti Frutti Booty” features guitarist Gonyea, an ex-member of The Fabulous Thunderbirds, and Geraci taking the vocal. “I’m very sensitive as to who I may want to bring into the recording studio. I have a vision for each song and who I’d like to have play on it. For “No One Hears My Prayers”, “I thought of Walter Trout. We had done a few shows together recently…it was his sound, his spirit that made me want to ask him.” Trout plays lead guitar while Ward sits in on rhythm. It’s “Hard To say I Love You” is a wonderful Mose Allison styled tune with the lyric “when your six feet in the ground”. “Dead Man’s Shoes” was written by Brennan, Gonyea and Peter Wolf (from The J. Geils Band), featured is Brennan’s heart felt vocal and harmonica. The only cover is “Jelly, Jelly” written by Earl Hines, and William Eckstein a.k.a. vocalist Billy Eckstine, and first recorded in 1942; the versatile Brennan handles the jazzy vocal while Welch takes his solo, and Geraci tickles the ivories. Vocalist Brennan excels again on both “Living in The Shadow of The Blues” and “Crazy Blues/Mississippi Woman”, two more well written tunes with some more great piano from Geraci. The former composition highlights Geraci’s creative process and he quotes Georgian artist Alexander Varvaridze who’s ethnic painting “Daydream” graces the album’s cover “when an artist is planning to create a new artwork, it first appears in the sphere of thought-form and subsequently manifests at the material level.”
Although the album is dedicated to the memories of Ella Miller, Tom Hyslop and Mike Ledbetter, the too short closer “Ode to Todd, Ella and Mike Ledbetter” is a dissonant nursery rhyme about Geraci’s son, dog, and late friend. Geraci is a pianist who has recorded both blues and jazz. His inspiration comes from an aggregation of sources. More than a technician Geraci’s got style.