Frankie Moreno - Back to the Boogie 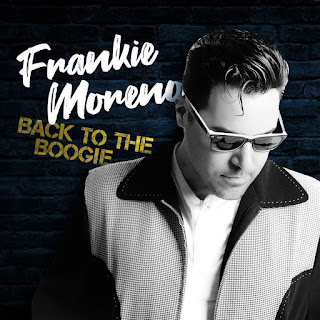 Singer who's known for his throwback, Elvis Presley style/ Singer and pianist Frankie Moreno is a swaggering, theatrical performer known for his updated take on classic rock & roll, dance-pop, and adult contemporary balladry. He initially gained fame appearing on Star Search at age 11, and built upon that exposure with a long-standing Las Vegas stage show and high-profile appearances at Carnegie Hall, The Kennedy Center, and The Hollywood Bowl. He has issued a steady stream of albums including 2011's Hangin' on a Maybe, for which he appeared on Dancing with the Stars playing his single "Tangerine Honey," and 2018's Broke Down in Paradise.
RawBorn in 1989 in Santa Cruz, California, Moreno was a child prodigy on the piano and first gained widespread fame at age 11 performing Jerry Lee Lewis' "Great Balls of Fire" on CBS' Star Search. Following his time on the show, he continued to perform, working alongside his brothers, bassist Tony Moreno and tour manager Ricky Moreno. In the 2000s, Frankie settled in Las Vegas, where he began headlining his own high-energy show playing a mix of original pop, classic rock & roll, and covers tunes. He has released a handful of albums including 2004's Raw, 2005's Miracles, and 2007's Rebel Revolution. Moreno also toured with Billy Currington, Air Supply, and Sugarland. In 2009, he collaborated with violinist Joshua Bell on a cover of the Beatles' "Eleanor Rigby" off Bell's number one Billboard Classical album At Home with Friends.
In 2011, Moreno issued the album Hangin' on a Maybe, featuring the song "Tangerine Honey." That year, he performed the song alongside his wife dancer/singer Lacey Schwimmer on ABC's Dancing with the Stars. He then followed in 2018 with the holiday-themed Frankie's Christmas Party, and the studio date Brokedown in Paradise. Three more albums arrived in 2019 with This Is Frankie Moreno, Live in Las Vegas, and Naked, the latter of which hit number three on the Billboard Heatseekers Chart. Here is his new album "Back To The Boogie".