Neil Barnes - Bald Guy With A Lot On His Mind 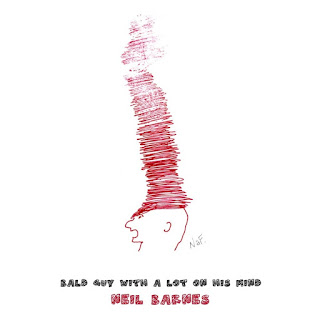 The Teachers:  Late '70's
I owe 99% of how I learned to play from Gary Smith.   Truly the Godfather of Bay Area Blues. Gary took the time to show me the how-to's and the don't-do's; along with the approach to the music I love. Because of Gary, I've spent untold hours, days, months, years of practice and frustration,  struggling to get those elusive sounds out of that tiny instrument.  I've spent fortunes on harmonicas, microphones, amplifiers and enough records to fill an entire garage. Strained relationships, strained jobs, obsessive behavior, crazed nights out.  ....and 40 years later, it hasn't stopped.  Thanks you bastard!
I also spent a lot of time going to see Charlie Musselwhite throughout the Bay Area.  This was in the early '70's.  I finally got the nerve to ask him for a real lesson; (I really was wrapped around the axle on third position.)  Imagine my surprise when he said yes and showed up at my parents house.  Charlie patiently played guitar to my caterwauling harp until those 3rd position mechanics started to sync in.  I'm forever grateful for that time with one of my true hero's.
Musical Influences:
People who influenced my harmonica playing....  those Chicago fathers of the instrument. Each one of 'em!!  I've tried to get every lick and phrase from them;  I still am, because I only steal from the best....
The people who actually influenced my musical direction were Paul Butterfield,  Muddy Waters, Charlie Musselwhite, Lee Oscar, The Band (Levon Helm), Robert Montes and Bob Gomes  (Robert and Bob are childhood friends who were playing music and in bands way before I started playing.  Their band (Jackson Street w/ Dave Gonzales) opened up regularly for the touring bands coming through town and I was able to hang out stage-side to Freddie King, Albert King, Albert Collins and many, many, many more.  LOT'S of nights at the Bodega!  (and an up close musical education I would not trade for anything).
The 80's and Joshua's Blue Monday Parties:
During the a time of 1980 through 1982,  we had a regular slot at JOSHUA'S in San Jose (on Stevens Creek Blvd.; down the street from JJ's). It was downstairs and always had a pretty big crowd.  Marty Kirkman was already an up and coming booking agent/manager.
The band, Bar-B-Q Barnes and the Rib-Tones, featured Hap Scott on bass and vocals (Rest In Peace, Hap), Larry Calley on lead guitar (Larry, I miss you're playing!), rock solid Robert on drums, Bob Gomes on the B3 and Sid Morris on piano. That was a damn good band if I say so myself. A B3 with Leslie and a stand-up piano. What a sound! (and what an aching back-- every single gig was like moving an apartment.)
During this time, we also had a regular night at the CATALYST in Santa Cruz.  Hap's stomping ground and always big fun.
For a number of gigs,  I was able to to get Sonny Lane and Johnny Waters to come in from Oakland. Huge thrill for me.For a couple of gigs, and for the 2nd Fountain Blues Festival in San Jose, Sonny enlisted Francis Clay and Luther Tucker. The night with those guys at Joshua's was like "Fathers and Sons".  God, I was thrilled. Both Francis and Luther were easy going, no airs despite their legacies, and real gentlemen.
Sonny Lane and I became close friends, and it wasn't until you get to an age where to start to reminisce, that I realized what Sonny had done for me; by getting these guys to play with my novice ass and allowing me to be on stage with them.   I'm forever grateful Sonny.  You really are royalty.
The Duo: with Greg Hartman. Simplified and easy.  A guitar and harp. Greg is a purveyor of the "Piedmont" style of guitar playing and sing's with a mature. Playing with Greg stretched me to play different changes, through the changes and to play music that could be said, was behind it's time then,  but is front and center right now.
Vinyl and CD's:
In 1980, I had the pleasure to cut a 45 under my own label, RibTone Records.A couple of my own songs, "Blues For Breakfast" and "Close Call".   That session included the great Little Willie Littlefield on piano (Google him!), Ron Thompson on slide and vocals, Junior Watson on guitar, Bill Stuve on bass and Robert Montes on drums.
A couple of years later, more vinyl, an EP of more originals, with some changes to the session members.  Once again Robert on drums, Junior on guitar, Bill on bass and the addition of Sonny Lane on guitar, Bob Gomes on B3, Hap Scott on vocals and the legendary Mark Naftalin on piano.  (God, I love that piano and B3 combination.... )
The latest effort, "Hyde and Seek", includes reworking of songs from the New Orleans great, Lee Dorsey, some Gospel classics, and even a rocker that I wanted to rework with a Gospel approach.  This session features Earl Thomas, Lady Bianca, Ron Thompson, Rev. Paul Smith, Oshmin Oden and Winfred Williams.
So here we are today, and I'm still striving to make and play some legitimate Blues.