Li'l Ronnie and The Grand Dukes - Do What Cha Do 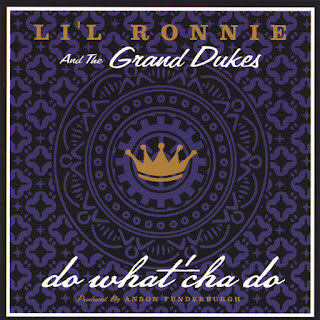 Lil’ Ronnie & the Grand Dukes are, to quote one reviewer, "…the real deal! … superb talents well versed in traditional blues". While Ronnie & the band are well schooled in all styles of blues they also use elements of 50's r&b, soul, vintage rock & roll & jazz in their unique blend of American roots music. They are led by harpist, singer/songwriter and Hohner Harmonica endorsee Ronnie Owens. Ronnie has been performing since 1963 and has been fronting his own bands for over 25 years. He has played with and opened shows for some of the biggest names in the blues world, John lee Hooker, James Cotton, Taj Mahal, Gatemouth Brown, Carey Bell, Anson Funderburgh / Sam Mayers, Big Bill Morganfield, Mark Hummel's renowned 'Blues Harmonica Blow Out' and many, many others. Ronnie and his band 'the Grand Dukes' are a critically acclaimed touring band and play anywhere from funky little blues bars, where the music was invented to major blues festivals, including a swinging, jumpin' night as headline artist at New York's prestigious Lincoln Center. They have earned the reputation as an exciting must see band. Ronnie and the band have recorded 3 critically acclaimed and internationally distributed CD’s. Their latest CD ‘do what’cha do’, produced by renowned blues guitarist Anson Funderburgh was a hit with Blues & Americana radio worldwide. The CD reached #5 on XM Radio’s Bluesville and reached #15 on ‘Living Blues’ worldwide radio charts, where it stayed for 2 months! ‘do what’cha do’ was ranked # 8 in Real Blues Magazine top CD’s of 2005, the band was also named ‘Best US Blues Band 2005’ from Real Blues Magazine. Ronnie and the Grand Dukes were also voted ‘Best Blues Artist’ at the 5th Annual Virginia Music Awards.

Do What Cha Do