Brian Tingle And Blue Thunder - Tryin To Make A livin 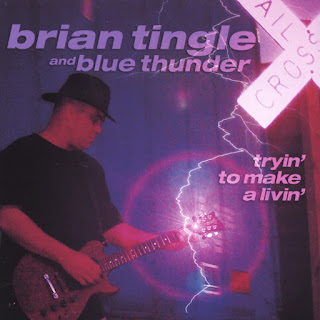 Brian Tingle is a seasoned guitarist from Baltimore , Md.Over the years this 40 year old bluesman has been the guitar player in many blues bands.He has also worked as a professional bass player as well for alot of bands,including RC Yetter and Riviera Paradise,a Stevie Ray Vaughn tribute band which plays all over the east coast.Because of his inherant bass skills he has always been employed in addition to his guitar gigs. Back in September of 2003 Brian took some original compositions to the studio and started working on "Tryin to make a livin". This powerful album is the testimonial from this seasoned veteran of the blues.From the powerful slide riffs in "Tryin to make a livin" to the heavenly guitars and angelic harmony vocals of RC Yetters "Days gone by",you will be amazed at what comes out of the soul and strong fingers of this man with a message. This album also features one of the finest saxophone players on the east coast,Mark Cornachione.He is featrured on tracks 2,5,6,7,9. This CD will spend alot of time in your player.