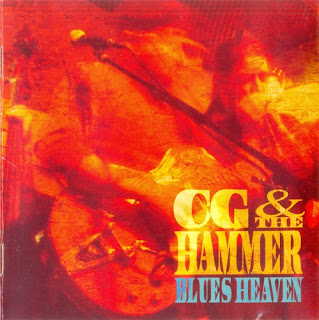 In 1999 Dov (“The Hammer”) Hammer and Sagi (CG) Shorer formed the band, influenced by the Blues music and lifestyle that they shared from their years of growing up in the USA. Accompanied by a powerhouse rhythm section, they have created a unique, authentic sound, combining the influences of Texas and Chicago Blues.
Over the years the band has played on countless stages in Israel and in the USA, in clubs, concert halls and festivals, including the ”International Blues Challenge” and the “Kings of Beale street” in Memphis TN, the “River city Blues challenge” in Ohio, and they have shared stages with the best Israeli and American artists – Willie Kent, “King” Earnest Baker”., Zora Young, Arkadi Duchin, Moshe Levi and Yahli Sobol, to name just a few. The band has also released 3 acclaimed albums: Their debut , in 2002 was “Feels like home”, followed by “Blues Heaven” in 2008, which was chosen as one of the top 12 independent Blues albums by the “Blues Foundation” in Memphis TN, and “Live in Tel Aviv” in 2010. The band is currently working on their next album , which was recorded at the historic “Sun “ studio in Memphis TN, the birthplace of Rock’n’roll, where artists such as Elvis Presley, BB King, Johnny Cash, Howlin’ Wolf , Roy Orbison and Little Milton recorded.A “CG & The Hammer” show is a live and kicking celebration, sexy and full of soul and fun, with a groove that can’t be ignored, combining original songs by the band with innovative renditions of Blues classics by BB King, Muddy Waters, Robert Johnson, Eric Clapton and Stevie Ray Vaughan and more.