The Alligators - Gimme Some Skin 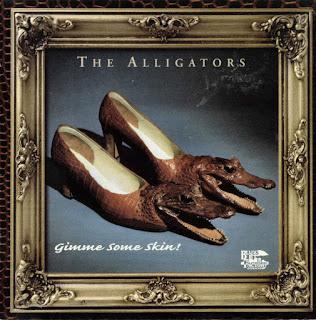 As a hard-touring band of seasoned blues masters, The Alligators have earned their status as a major draw on the Midwest blues scene, delivering authentic blues with a powerfully personal and distinctively driving style. They have been drawing crowds of devotees, and winning new fans, for over twenty-five years. The Rose-Robert Agency is proud to have represented this top-notch, top-draw blues band "The Alligators" for 20 years ! The Alligators can get a large festival audience on it's feet in a matter of minutes, or play sweet, gut bucket blues to a small intimate audience with absolute conviction. Their roots run from the deepest delta forefathers to the contemporary, with many stops along the way. The Alligators are five journeymen who have found themselves on a full-throttle blues train that shows no sign of running out of steam. Lead vocalist Dave Krammer and harmonica player Wailin’ Dale started the band in 1984. Guitarist Steve Schwartz joined in 1993 followed by the highly respected bassist Frankie Lee and drummer Jon Johnson. Their longevity is a testament to their success. Over their long and esteemed career, they have developed into one of the tightest and most sought after bands in the Midwest. The Alligators not only have outstanding lasting power as a band but an impressive recording history as well. Beginning in 1994 with their debut CD “Gimme Some Skin”, they have recorded four successful and highly acclaimed CDs. The Alligators are currently touring in support of their fourth recording, released on Hitchcock Records, "20 to Life". Their powerful stage presentation, coupled with their rousing recordings, has launched these exemplary artists to extraordinary critical acclaim. With a vitality drawn from their authentic love of the blues, The Alligators have outlived and out-shined many other blues bands. They have evolved into respected innovators and caretakers of the music.