Kilborn Alley Blues Band - Put It In The Alley 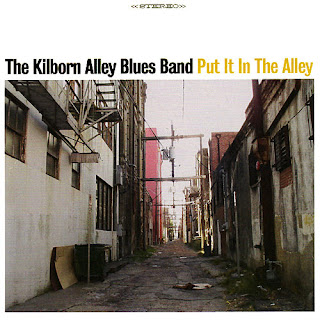 It shouldn't come as a surprise to any fan of Nick Moss that a band signed to his Blue Bella label and produced by him would have a gritty, tough and raw approach similar to his own. The Chicago-based five-piece Kilborn Alley Blues Band recorded its first album in only three days, so the feel of Put It in the Alley is as immediate and uncompromising as a live show. Songs shift moods from the basic, stripped down Windy City blues of "The Blues Takes Me In" to the Southern-fried R&B of "Thousand Miles." Lead singer/guitarist/frontman Andrew Duncanson sounds somewhat like a cross between Wet Willie's Jimmy Hall and early Boz Scaggs, using his soulful croon to soften the attack of the band's gruffer sound. But it's harp player Joe Asselin, who has surely listened to his Little Walter albums, that adds feral heat, especially on the seven-minute slow blues "The Breakaway." All but one of the songs is original, and although none of them reinvent the blues wheel, they are all solid vehicles for the band to lay into. A closing cover of B.B. King's "I Like to Live the Love" combines the smoother sound of King's later work with Kilborn Alley's naturally unvarnished playing. Duncanson oozes personality and between his dynamic vocals and the group's taut playing, they pull off the tricky task of paying tribute to the Chicago sound without slavishly aping it. The practically live-in-the-studio performance keeps the fire turned up and even at an hour, the disc never feels padded or overlong. An impressive debut.