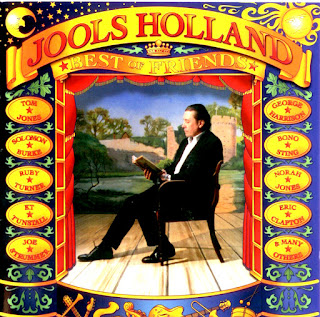 By 2007, Jools Holland was a national institution, performing jazz and good-time big-band music when it was totally out of fashion. Best of Friends was yet another album in the Small World Big Band series and featured many of the highlight tracks from other albums in the series, including the original Small World Big Band, More Friends, Friends 3, and Moving Out to the Country. The album opened with one of Holland's favorites, "Tuxedo Junction," which he played alone -- well, with the help of his big-band R&B orchestra. A boogie-woogie piano and a big-band orchestra were not typical sounds heard on many albums from the mid-2000s. But then the collaborations came thick and fast, with guest stars who had appeared on his regular TV series, Later with Jools Holland, or his New Year's Eve specials, Jools Holland Hootenanny, which since 1992 had replaced the traditional Scottish Hogmanay celebrations as the only totally musical New Year's Eve show on mainstream TV. Reading like a who's who of the music business, singers old and new joined Holland playing the piano and in most cases with the big band backing them, and the album featured styles across as wide a range as could be found on any album from this time. Venerable acts included Lulu on "Where Have All the Good Guys Gone," Edwin Starr on "Snowflake Boogie," Prince Buster on the ska track (what else?) "Enjoy Yourself," and Tom Jones on "Think." Among the more contemporary artists, Norah Jones guested on the track "In the Dark," Stereophonics on a version of "First Time Ever I Saw Your Face," KT Tunstall on "Darkness on the Face of the Earth," and India.Arie on "Georgia on My Mind," a track that first appeared on Holland's country album. There was a remixed and updated version of one of George Harrison's last songs before he died, "Horse to the Water," and other highlights included David Gilmour playing a distinctive guitar on Mica Paris' "I Put a Spell on You" and Eric Clapton with Solomon Burke on "Mabel." Apart from boogie-woogie, jazz, blues, and soul, the songs ranged from the pop-ska fun song "Oranges and Lemons Again" with Suggs from Madness to a 1930s-style torch song, "Out of This World," featuring Chrissie Hynde. With a running time of nearly 80 minutes, almost the maximum that could be fit onto one CD, Best of Friends also certainly provided value for the money.