Dennis Siggery & Neil Sadler - Half & Half 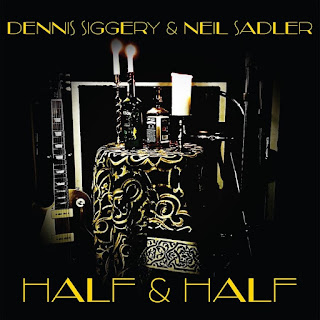 Dennis Siggery and Neil Sadler were the creative force behind the old Eric Street Band (before Dennis formed the new band for the latest 2 albums). So if you were a fan of the old ESB you'll love this new album of Blues and R&B songs! Dennis Siggery and Neil Sadler were the creative force behind the first 10 albums by the Eric Street Band (before Dennis started working with a new band and co-writer on the 'Purple Passage' & 'Eye Of The Storm' albums). This new album, 'Half & Half' sees a return of the old partnership, featuring the unique vocals of Dennis and the guitar and production talents of Neil. Most of the tracks are new original songs by Dennis and Neil - so if you loved the old Eric Street Band songs, you'll love these! The album also includes their reworkings of the classics 'Little Red Rooster' - a big hit in the 60s for the Stones, 'Unchain My Heart' - made famous by Ray Charles, 'Handbags & Gladrags' - famously used as the theme for The Office, and Dylan's 'Knocking On Heaven's Door' - with an extra verse written by Dennis.