Rob Williams And The Bluesdrivers - Gone Too Long 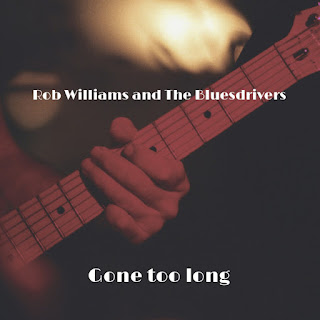 Having the blues does not always mean sadness and pain. Blues music is an expression of emotion from deep inside. It means something and different to everyone,but the blues has one common goal in mind: its a release and a way to celebrate life, love, pain and happiness. Rob Williams began his journey at the age 8 when his mother bought him his first guitar. He taught himself to play from there, he played in church groups and surrounded himself with music and was in his first band at 12.  Playing all over the east coast, Pittsburgh has remained his home and there he has honed his skills and style by playing with many blues musicians in Pittsburgh such as the great Chismo Charles.With many influences in his music he has combined these influences into a melting pot of guitar driven music and soulful playing. Stevie Ray Vaughn, Joe bonamassa, Tommy castro, Walter Trout, and Albert Cummings are among the styles your ears will enjoy at one of the shows. The Bluesdrivers are from many backgrounds and areas, with Cory Derringer on Bass guitar. Cory has a funky, bluesy groove that he lays down to keep the thump going. His influence is Victor Wooten which he attends Victor's camp with him. Ben Skinner on drums brings his unique style and flavor to the band with his influemces being many from jazz, rock and funk. John Hicks on The harmonica is a master at the blues harp and has been playing for 40 years with many greats and bands from Pittsburgh. His soul bending style is a treat to behold and to see him is to believe him Erik Zettelmayer, also known as Z, has played since he was 14 and performed in Nashville, and Rosa's blues club in Chicago. Working with Mark Lucas has helped shape Z into th eblues guitarist he is today. He loves chiicago blues and has honed his skill around that style.