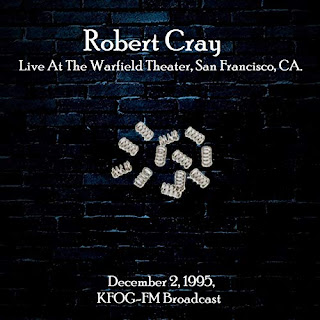 Robert Cray is an American blues guitarist, composer and singer.  With bassist Richard Cousins, keyboardist Peter Boe and drummer Tom Murphy, they launched The Robert Cray Band in 1980 with “Who’s Been Talkin”. The album was recorded during constant touring in the U.S. in 1978. The record was initially shelved for two years, being eventually issued by the short-lived Tomato label (whose licence was picked up by “Atlantic Records” (U.S.) and “Charly” in the UK.
After several years of regional success, Cray was signed to Mercury in 1982. It was the connection with the producing and songwriting team of Bruce Bromberg and Dennis Walker at Hightone that helped to create the mold-breaking music of “Bad Influence” (1983) and “False Accusations” (1985).
In 1984, The Robert Cray Band completed their first European tour to critical acclaim. Cray’s participation with Albert Collins and Johnny Copeland on “Showdown!” (1985, Alligator) and the 1986 album release, “Strong Persuader”, again produced by Walker, both received Grammy Awards, while the crossover single “Smoking Gun” gave him wider appeal and name recognition. During 1986 Cray played 170 concerts, including his seventh European tour since 1984, building on his increasing reputation in the UK.
The Robert Cray Band’s next album “Don’t Be Afraid of the Dark” (1988) was recorded in Los Angeles, California, and featured David Sanborn on guest saxophone. The title song from the album won Cray his third Grammy, and he guested on Eric Clapton’s “Journeyman”, whilst also being on the bill at Clapton’s eighteen show marathon at the Royal Albert Hall in London. In 1991 Cray was selected to present Howlin’ Wolf’s induction trophy to Wolf’s widow, Lilly Burnett, at the sixth annual “Rock and Roll Hall of Fame” Awards. Later that year Cray took part in the “Newport Jazz Festival” with B. B. King and John Lee Hooker. Cray issued his following records under his own name, Robert Cray.