Ray Bonneville - Roll It Down 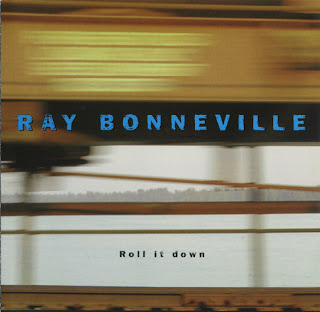 Roll It Down begins with a funky, roots rock-based "Tomorrow's Yesterday,", a song that immediately brings to mind the super-group Little Village featuring John Hiatt. The bassline is also more prominent here. "Under The Bridge" is another slow blues-oriented song that could draw comparisons to Robert Cray without the great blues guitar solo but with a credible backing keyboard. The relaxing nature of most of Ray Bonneville's work is ever-present through the baker's dozen of offerings, especially the bounce emanating from "July Sun." "You might know the way to go/If you ask a passing crow," he sings as Colin Linden helps out on mandolin. Most of the time the arrangements work but the title of the album gets the tracks off on the wrong foot, and they can't quite right themselves. The shining moment comes during "Oxford Town," a heartfelt duet with Jonell Mosser on harmony vocals, bringing to mind a possible duet between Daniel Lanois and Emmylou Harris. Another very good effort comes from "Walk With Me," a toe-tapping melody straight from Waylon Jennings with some fine guitar picking. Carrying the momentum during "Tiptoe Spider," this track showcases Bonneville at his best: vocal and guitar with minimal backbeat. Near the homestretch of the album, though, it appears that he is repeating himself ever so slightly. "Who's Talkin' To Me" sounds adequate, but the arrangement appears to have been done before. A Dylan-like attempt on "Stand Real Still" results in a creeping blues song that should be found on Time Out Of Mind. Finishing up with "I Been A Train," Bonneville has created another solid album blending blues, folk and a few things in between.