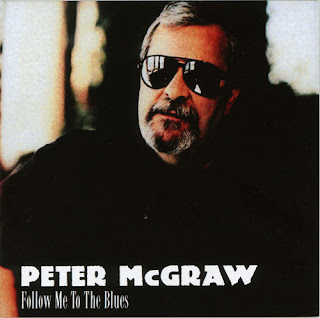 If you're going to release a record with nine of the ten tracks being covers of blues standards, and you hope it will get some recognition, then you - and the rest of the musicians on the disc - better be very good. On Follow Me To The Blues, Peter McGraw, and the rest of the musicians, are exactly that. On his first solo album, vocalist McGraw is joined by: Donnie “Mr. Downchild” Walsh on harp; Hans McMinamin on guitar; Roy “The Maestro” Powers on keyboards, Richard Love on drums, and Larry “O” Mayo on bass. The disc opens with the title, and sole original track, written by Powers. The song does exactly what an opening track should do - impress and expose the listener to a taste of what they're in for. In barely more than two minutes, everyone gets in some impressive highlights and McGraw establishes himself as a singer I want to hear a lot more of. My immediate thought was that if this was the type of stuff I'd hear, I'd follow these guys anywhere.
By the next track, “Sweet Home Chicago,” the guys are locked into a groove they never lose. Love, Mayo, and Powers, old band mates in The Vagrantz, are obviously still in tune with one another after all these years. Their outstanding rhythm on this - and the rest of the disc - is evidence of that. With repeated harp highlights by Walsh, great guitar riffs from McMinamin, and gruff, yet melodic, vocals from a voice that was made to sing the blues, by McGraw, this one's a winner.
In the first 60 seconds of “The Sky Is Crying,” the little pieces you'll hear from everyone in the band will make you happy that there are eight more minutes of it still ahead. I don't care how many times you've heard this track and how many bands you've heard do it - this version will knock your socks off. With everyone at their best, this one's unquestionably the disc`s best. Another track that will have you comparing it to the original is “I Got A Woman.” With Love absolutely relentless on the drums behind him, this one has McGraw sounding as soulful as Ray Charles. Anyone who has ever read my reviews of CDs containing the song “I'd Rather Go Blind” already knows that the song is my all time favorite. As a matter of fact, I've been known to bring the Koko Taylor version of it to clubs with me, so that I could lend it to the band to learn it. The results were always good - I've never heard a version of the track I did not like. McGraw`s version allows me to keep that thought intact. This song is meant to be sung by a strong, soulful and raspy voiced vocalist and ya don't get any stronger, more soulful and raspier than Peter McGraw. Of course, you also need an incredible guitar lead to make this one work and McMinamin is all over it. Great stuff! Another track that had me shaking my head in awe was “As The Years Go Passing By.” This ballad is one of the slower and more low-down blues tracks....the kind that always make me smile. With the rhythm section so softly locked in just the right spot, McGraw, McMinamin, and Powers excel on the vocals, guitar and keyboards. Other tracks on Follow Me To The Blues include: “Hoochie Coochie Man,” “Bring It On Home To Me,” “Unchain My Heart,” and “Let The Good Times Roll.”
This review has been complimentary written for www.bostonblues.com by Peter “Blewzzman” Lauro/