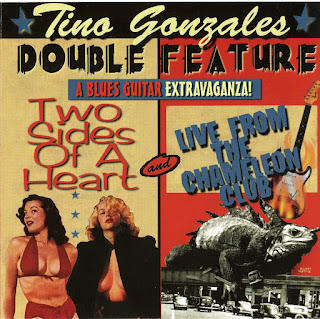 Some critics have called Gonzales "the Latin-American Stevie Ray Vaughan," but a closer listen also shows bits of B.B. King and Carlos Santana popping up in Tino's Latin-with-the-blues style. Double Feature is a reissue of Gonzales' debut CD, originally released in 1994 on Remedy Records, with the previously unissued-in-the-U.S. EP Live at the Chameleon Club. Tino does a nice job on a pair of Ray Agee tunes ("Talk About Love," "Leave Me Alone") and covers of tunes by McKinley Mitchell, Howlin' Wolf, and old chestnuts like Jimmy Reed's "Big Boss Man" and Andre Williams' "Twine Time." But it's the original material here that impresses the most; songs like "Piece of Work," "Young Thing," and the title track end up being the shining moments on the studio portion of the disc. The three live EP bonus tracks are Gonzales in his true element: cool, relaxed and playing with a particular passion on the closing "Midnight Blues" that makes all the comparisons to Stevie Ray seem unfounded. Tino Gonzales has his own story to tell.