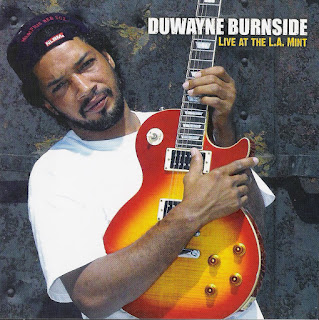 Duwayne Burnside was born in the late sixties in Senatobia, Mississippi and grew up hearing his father, R.L. Burnside, and family, as well as neighbors play music; guitar driven Mississippi hill country blues. Along with his family and neighbors, the radio was another influence on Duwayne's evolving style. He picked up the guitar before he was old enough to hold it himself. Guitarist, singer, and songwriter Duwayne Burnside is one of 14 children born to legendary North Mississippi musician R.L. Burnside and his wife, Alice. He has been a frequent performer with the North Mississippi Allstars since the early 1990s, when that group, fronted by Luther and Cody Dickinson, formed. The young Burnside learned his first few guitar licks and chords from his father, but proved a quick study and soon began playing with local club owner Junior Kimbrough and the Soul Blues Boys. Growing up in Holly Springs, he was close to Memphis, and as soon as he was able to get to Memphis, he did, and soon had the chance to sit in with Little Jimmy King, Albert King, B.B. King, Bobby "Blue" Bland, and others. Duwayne also began playing in his Dad's band, Sound Machine Groove, where he further honed his skills as a guitarist and showman. He recorded for Hightone and Fat Possum Records with his father's group before moving to Memphis, where he opened his own club, Burnside Kitchen and Grill, near Highway 61. He booked the music, cooked the food, sold the beer, and had his own band perform there on a weekly basis. In 1998, Duwayne traveled to Los Angeles to record his first album, Live at the Mint, as Duwayne Burnside & the Mississippi Mafia. After returning to Memphis, he decided to take a break from the bar business and settled back home in Holly Springs. In 2001, he joined the North Mississippi Allstars on-stage for the first time in Birmingham, Alabama, and that led to incessant touring with the band. He recorded with them on their third album, Polaris, and is featured on two of the group's EP's. In 2004, he opened another version of the Burnside Blues Cafe in Holly Springs and formed a new band that fused soul blues with hill country blues. His albums under his own name include Live at the Mint (1998) and Under Pressure (2005), both for B.C. Records. An album celebrating his father's life and music remains in the works. One of the last things he asked his father to do – R.L. Burnside passed at age 80 in 2005 – was sing with him at the massive, popular Bonnaroo Festival in Tennessee. Burnside continues to tour, helping to keep the North County, Mississippi hill-style blues flourishing.
DUWAYNE BURNSIDE - gtr/voc, R.L. BURNSIDE - gtr/voc, EDDIE BAYTOS - kbds, MIGHTY JOE HILL - rhythm gtr, DAVID KIMBROUGH JR. - bass, CEDRIC BURNSIDE - drums.