Adam Karch - Everything Can Change 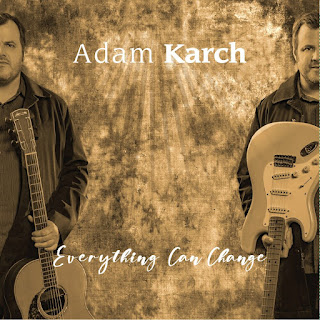 Although Adam Karch is from Montreal, his music embodies the spirit of Americana like a scenic ride across the country. He plays a hybrid acoustic blues that consists of precise fingerpicking that recalls players such as Chet Atkins and Kelly Joe Phelps, along with an innovative percussive technique that is thoroughly modern, while somehow primal and anchored in tradition. Adam has a raw talent that was evident from the first time he picked up the guitar at an early age. By age 14, he was fronting bands, headlining clubs, and dazzling audiences with both his spirited guitar playing and soulful singing. His first album "Crossroad Diaries" (Justin Time Records 2002) was an exciting compilation of original songs that highlighted Adam's impressive range and exceptionally fiery guitar playing. At this point, Adam toured relentlessly and as his shows began to lean more toward acoustic exploration, he developed his signature sound.
By the time "Cotton Fields" (Bros Records 2011) was released, the Adam Karch sound was clearly defined with its fingerpicking style that transcended the rock and roll ponderings of his first recordings. Originals and covers intertwined into a full-fledged celebration of the blues throughout the ages. The title track was a historical pastoral that at once drew from the tradition of blues spirituals, while poignantly maintaining a modern edge. At this point, Adam was just warming up, as his next project "Blueprints" (Bros Records 2014) was a complete deconstruction of the blues and it led listeners to realize that a pop song when stripped down to its essence is indeed a blues song. Adam, the artist, is at once a chameleon and an innovator. He is able to interpret any guitar style note for note, but more impressively, he is able to deconstruct the content and build it into something deliciously unique and completely Adam Karch. Consider how he takes the Bee Gees' disco anthem "Staying Alive" and strips it down to what it really is - a blues song.Adam also ventures into original territory, taking the lyrics of long-time collaborator James Stadnyk and adorning them with rich melodies that flow seamlessly with the words, creating an instant union. The storytelling technique in songs such as "Sin" creates a Southern gothic where characters are both saved and damned in the blink of an eye, as Gospel traditions and a darker blues intertwine.Adam is a veteran of music festivals from Pensacola (Blues Society of Northwest Florida) to Vancouver (Vancouver Island Blues Bash), and his travels bring him across the country, riding the rails and performing for stunned audiences. As part of the "Home Routes Tour", Adam regularly brings his exciting show to intimate venues. These real-life railway adventures were the centerpiece for his fourth record, titled "Moving Forward" (2016). For his brand new album "Everything Can Change" , Adam again present an even mix of original songs and cover songs, featuring Adam with his trio, as well as his signature solo acoustic performances. You can expect to see Adam performing across Canada, the US and Europe continuing to wow audiences!

Everything Can Change
Автор: errny на 19:17