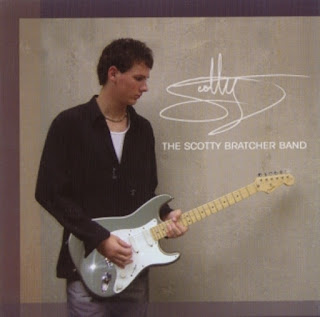 Scotty Bratcher, born October 31, 1987, began playing guitar at an age that it became second nature to him, he was 2. By this time, Stevie Ray Vaughan was impressing the world, and when the 1989 release of Austin City Limits was aired, you can imagine where Scotty was-in front of the television.  Scotty's father had acquired, over time, a few electric guitars that he introduced to the toddler. At age 11, the family, grandmother and all, began going to open mic nights at clubs in the greater Cincinnati area to expose Scotty to the live music scene. This was where he began getting on-stage experience and eventually found band members to support him. In the next several years, Scotty sat in with various bands, one of which posed the opportunity to open for guitar hero Lonnie Mack.  In 2000, Scotty was entered into the National Jam with Kenny Wayne Shepherd Contest where contestants were to download via computer, KWS’s new single of which the lead solo was to be made up by the competitors. Out of 1,200 entries, Scotty received 1st runner up. Scotty has played with and opened for names like Ted Nugent, Little Texas, Blue Oyster Cult, Buddy Guy, Joe Bonamassa, Chris Duarte, Anthony Gomes, Foghat, Lonnie Brooks, Ronnie and Wayne Baker Brooks, Bob Margolin, Eddie "the Chief" Clearwater, Lonnie Mack, Walter Trout, .38 Special, Styx, Peter Frampton, Kenny Wayne Shepherd, Tinsley Ellis, Lou Graham of Foreigner, Dickey Betts of the Allman Brothers Band, Delbert McClinton, Lee Roy Parnell, and many more.  Scotty is also an accomplished studio musician who has recorded with many blues, rock, country, gospel, funk and even heavy metal artists. As of 2007 and since, Scotty also joined forces with Noah Hunt, lead singer for the Kenny Wayne Shepherd band, as the guitar player and 2nd vocalist of the group The 420 Allstars featuring Noah Hunt.  In 2013, the album "All and Nothing More" was released featuring many new original songs, and a few covers featuring legendary Southern rocker Jimmy Hall. After the release, Mr. Hall contacted Scotty about starting a side project together, adding yet another schedule full of  opportunities to see Scotty perform around the country, and sometimes out of it!