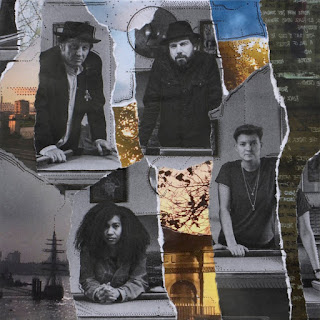 A London band - but London's a big city...From the wild west west London.. the London Borough of Los Angeles, an astonishing vocalist – Dregas. From the frozen north north London.. the London borough of Stockholm, a funky master of rhythm and groove - tougher than an IKEA manual - Amanda on drums. From sunny south south London.. the London borough of Santiago De Compostella, a master of so many guitar styles he leaves audiences dumbstruck, the amazing Iago on guitar. And from inner inner London.. the Royal London Borough of Hartlepool, Graeme on bass - he played bass with Tenpole Tudor and is an established songwriter. Some highlights from the last months... Deep Blue Sea signed a 3 album deal with All About Blues Music Ltd for an internet-based 3 part graphic novel "Blues In Buckle" - Deep Blue Sea is providing the soundtrack for the novels. Deep Blue Sea streamed live in Soho on Facebook - hitting 75,000 views. Recorded their debut live album "Live It Up" at Harpenden R&B Festival in May 2018. The album reached the top 10 in the IBBA radio playlists for July and August 2018. Signed to Razor Edge Records in 2019 and recorded their first studio album "Strange Ways" released on 24 September 2019. (http://blues.gr/profiles/blogs/q-a-with-uk-based-deep-blue-sea-blend-retro-senses-and-sounds-fro)