Southbound Snake Charmers - To The Bone 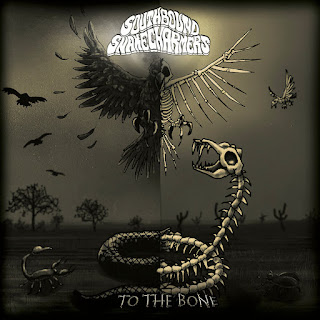 Dirtier than a roadhouse bathroom and guaranteed to make you want to get down and slither like a red bellied black snake!  The Southbound Snake Charmers are a dynamic power trio based in Melbourne conjuring up their own unique brand of dirty, raw, rocking blues since 2013. With an overall sound that’s difficult to pin down, the band draw on classic blues rock influences such as Cream, Rory Gallagher and Thin Lizzy, with Chris’ vocals often compared to that of Johnny Winter. The release in 2014 of their debut EP ‘The Dirty Blues’ was met with rave reviews and was described as “dirty and as sexy as they come” and “dirty guitars are the soul of the EP, adding layers and creating some very sexy grooves while Nathaniel Sutphin and Brooke Maloney’s rhythm section keep things nice and simple, to great effect” Lee Snipes, Whatsound. The Dirty Blues was backed up in 2016 with the release of the eagerly awaited Voodoo Chicken Shack EP. Reaching number 13 on the Australian blues roots charts and gaining radio play both in Australia and Internationally. In 2017 the full length album Rhythm and Rust was released, once again to a swag of positive reviews, press in the UK Fireworks Magazine and Dutch Blues Magazine as well as gaining international radio play and inspiring several fan videos. It was described as “the brilliantly ferocious hard-rocking blues satisfies my craving for exemplary music in spades. On a ten point scale, this record scores an eleven.” Phillip Smith, Rock & Blues Reviews. The Southbound Snake Charmers have also been gaining attention on the live front with their energetic shows and have bewitched audiences at St Kilda Live ‘n’ Local Festival, Bruthen Blues Festival, Trafalgar East Blues Festival, Brunswick Blues & Grooves Fest and Music Slam Bendigo, amongst a plethora of local gigs around Melbourne. Stay tuned for more crunchy, groovy, greasy slides and foot stompin’ beats coming to a venue soon near you.