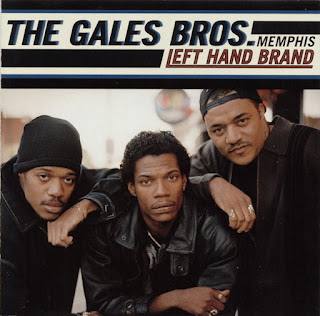 While the Gales brothers have played together all of their lives, this remains the first time they've ever recorded together in a good studio. Recorded at House of Blues Studios in Memphis, it was produced by David Z., who has also worked with Prince and Big Head Todd and the Monsters. The Gales Brothers, all born and raised in the same house in Memphis, have all forged their own musical paths in the rock and blues world, but when the three get together for a live performance or a studio outing, a treat is in store for the blues guitar aficionado. Eric and Eugene formed the Eric Gales Band, while Manuel (b. Dec. 4, 1968) took the stage name Little Jimmy King (after Jimi Hendrix and Albert King). King has recorded three albums for the Bullseye Blues/Rounder label, Little Jimmy King and the Memphis Soul Survivors, Something Inside of Me, and Soldier For The Blues. Eric, however, was the first family member to break out; at age 15, he signed his first recording contract and released two albums, The Eric Gales Band and Picture of a Thousand Faces. By 1991, the critics were calling him the next guitar prodigy; Gales won a poll in Guitar World magazine as "Best New Talent," appeared several times on The Arsenio Hall Show, and found some prominent fans in Eric Clapton, Keith Richards and Mick Jagger. As a unit, the Gales Brothers released one album, Left Hand Brand, on the House of Blues/Private Music label in March, 1995. Although House of Blues has since formed an alliance with another label and Private Music was consolidated into another unit of BMG, the record should still be available.  It a good mixture of rock and blues with a heavy emphasis on the guitar.  This is a must have album for fans of Little Jimmy King or the Eric Gales Band and fans of guitar-based blues rock are sure to be satisfied.