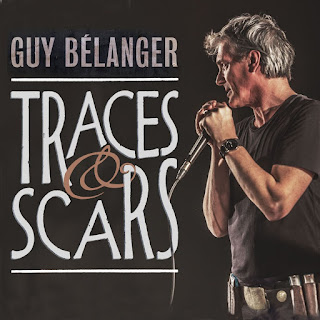 Traces & Scars is Guy Belanger’s 7th album and this highly recognized Canadian harp player shows his roots in music from America’s South.  The sound is deeply Southern, with front porch blues-influenced Americana and folk as the style.  According to his bio, Guy Belanger has been awarded 14 Lys Blues trophies and has also won the prestigious Canadian “Harmonica Player of the Year,” which was presented at the Maple Blues Awards in 2014 in Toronto.  He also won the Andre Gagnon Award 2016 (instrumental music category) presented by SPACQ. The main band is Guy along with Andre Lachance on guitars (including lap steel), Marc-Andre Drouin on bass, acoustic guitar and piano, and Michael Roy on drums and percussion.  Nine other players and two singers join in the mix, an eclectic and quite effective band and group of featured, add-on musicians.
The album is a melancholy mix of predominantly instrumental tunes.  There are two songs along with the ten instrumentals. The album begins with “My Dearest Friend,” a somber tune with harp and acoustic guitar that wafts back and forth between the two players.  The song is in memory of Guy’s brother Bob Walsh; one can feel the expression of emotional pain.  “Better days” is for his British friends and is a more upbeat cut with harp that expresses hope along with some haunting lap steel.  Preston Reed appears in the next track.  His guitar tapping style is interesting and he and Guy blend well in a folk sort of cut .  The piece moves along smartly and the picking and blowing are well done.  “Les Mauvaises Herbes” is a re-visitation of the title song from the film made by his brother Louis. It’s about two guys who decide to go into marijuana (the evil herb) farming.  The film verges on the absurd according to reviews but the song is anything but absurd.  The steel guitar provides a haunting sound which is eclectically good and Guy then blends his hard into the mix in midstream.  The cut has kind of a country sound, lilting and seductive while also pensive.  The first of two songs is sung by Delaney Davidson, a New Zealander whom Belanger became acquainted with via French photographer Olivier Longuet.  It’s another somber cut with Davidson emoting and there is some nice harp and guitar.  The pace picks up with “See the Light,” a very up tempo piece with a bouncing harp lead and some nice guitar laid down by Kaven Girouard whom Guy met while touring with Celine Dion.  He’s got a great tone and he and Guy play their heart out- it’s my favorite track of the CD.
The title track kicks off the second half of the album.  Cellist Eric Longworth and Guy play off each other and with each other well as the band tastefully backs them in this laid back and solemn piece.  Next up is “Common ground” where Guy and the band lay it out together with little apprehension and fuss.  It’s guys hanging out and making good music.  Jazzy, a little funky, it’s an interesting work. “Kalaw” is up next; it’s a song based on a small village in Burma.  Guitarist and composer Claude Fradette plays some tasteful guitar and Belanger offers restrained but focused harp.  One can imagine a small, backwards South Asian village as the piece wanders and wavers along.  Luce Dufault is featured here in the second song, “Who’s Left Standing.”  She is a Quebec singer, something Blenager always features on his albums, and with her he chose one who is a close friend.  Here vocals are well done;  she sings with deep emotion and has a sweet little vibrato.  The song is from Texas band Storyville and the pedal and lap steel guitars adds a nice touch to the piece.  It’s another favorite of mine from the CD.  “Nitassinan” is a song about the territory in the North-East of Quebec where the Innu have lived for 8,000 years.  It’s another cut that is both somber and interesting.  The final number is “Hot Time,” a cut inspired by the Louisiana voodoo dances and Cajun rhythms.  It builds and builds and makes for a cool ending for the album. The one sheet calls this a folk-blues album.  It’s heavy on the folksy side and light on the bluesy side.  The music is well done and players are absurdly good.  If you want straight blues this will not be your cup of tea, but if you are looking for something different, mostly down tempo, filled with emotion and a little different then this might be something you want to try out.  I enjoyed it, but the solemn and somberness is really dark and down.  There is hope expressed, though, and Guy Belanger does a good job expressing a range of emotion with his music.