Matt Joiner Band - Back When 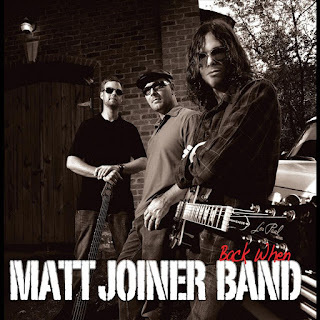 The debut album for the Matt Joiner Band. Released August 28, 2012. All songs Written and Recorded by the Matt Joiner Band. Mixed and Mastered at John Keane Studios in Athens, Ga. Cover Photo and Design by Gary Kufner.
Find a nurse that worked the graveyard shift in the maternity ward at St. Mary's Hospital on June 18, 1982 and she probably won't have a bad to the bone story to tell about young Matt Joiner. How were they to know the crying baby would become the second most famous guitarist to call Madison County his first home? The pride of Colbert, Georgia, in fact. Joiner's music blends slick licks and gritty narratives informed by the hot dogs at Billy Meadows Station on Highway 72 and the solemn Sunday sermons of Brother Pike, in a place his teenage hands helped build called Little Bethlehem. Seriously.
That was back when...way back when. Before his hair grew past the eyes to hide his face and before his Chuck T's needed duct tape to survive. His Dad taught him a few chords. A music teacher at school(Doyle Lightfoot), a thumb-picking guitarist in the style of Chet Atkins, taught him a few more. Sneaked listens of Rick Dees Top 40 introduced him to secular music. Then he spent a few years listening to some Stevie Ray Vaughan, repairing broken cars from Japan, playing guitar, and little else. Fast forward to 2012: With a rock solid rhythm section (drummer Mark Turiano and bassist Clay Hinson) The Matt Joiner Band is a cocksure power trio touring the southeast relentlessly, in support of their impressive indepently released solo debut album Back When, a critically acclaimed blues-rock scorcher produced by John Keane (REM, Cowboy Junkies, Widespread Panic). He's also an in-demand special guest having shared the stage with the likes of Rollin' Home, Clay Leverett & Friends, The Rattlers, Drivin' n' Cryin' and the legendary Geoff Achison. The Athens, Georgia-based band has one foot in the garage with their sights set on arenas coast to coast. In the meantime, they'll play at your club and remind everyone to drink up, and tip the bartenders.