Mick Pini - Into The Distance 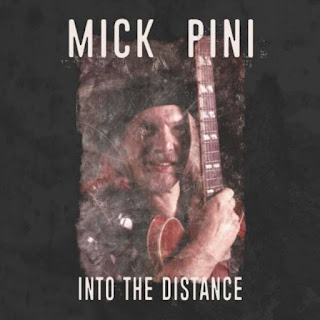 If you’re lucky enough to catch veteran British bluesman Mick Pini live you are guaranteed the real deal; no pedals, no effects, just a (rare) 54 Strat (stroked) played by a bluesmeister. Oh - and how he makes it plead, bleed, sing, scream, cry – and smoke! With a life time in music you’ll hear echoes and influences from the whole tradition of the blues in Mick’s playing. His uncompromising adherence to a genuine belief in his music has never been deflected. Those distinctive raw, attacking riffs and phrases, often reminiscent of such legendary names as Freddie King, Albert Collins or T-Bone Walker hit you with aggression not unlike a ton of bricks, then in a moment, he’ll melt your heart with a sweeping phrase of pure beauty.
However, Mick Pini is unquestionably a unique living legend in his own right ... the genuine article. His authentic voice and outstanding guitar work personifies the blues in an inimitable way.
Mick has toured the world for more than 40 year. He lives, breathes, plays and sings the blues with genuine passion even his 1954 Fender Stratocaster smokes!
These are the hallmarks of Mick Pini: to encounter him live is a joy not to be missed - it’s a blues master class! Mick started playing guitar as a young boy back in 1960. Since then he’s paid his dues in pubs, clubs, festivals, concert halls - hell, even busking on the streets. Over a lifetime he’s worked with all sorts: Doctor Ross, Professor Longhair, Rich Grech, Mojo Buford, Louisana Red, Dick Heckstall-Smith, Chris Farlowe, Mike Vernon, BB King, Luther Allison – and more than a few others. Currently based in Germany, Mick has worked with Roy Estrada (Little Feat) and Jimmy Carl Black (Frank Zappa). His last two albums are the acoustic CD “Highfield Boy” (2017) and the brand new “Into the Distance” (2019).