Samantha Fish - Kill or Be Kind 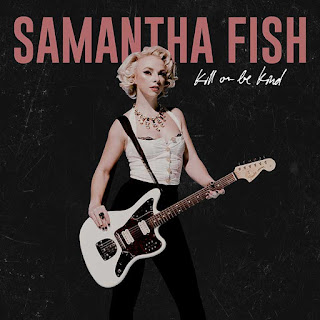 Stripped back Blues Rock opener ‘Bullet Proof’ is just part of the story of the new album from genre-bending and genre-blending guitarist, singer, and songwriter Samantha Fish. It’s a great song and certainly one to make you sit up and listen but ‘Kill Or Be Kind,’ released on 30th August, has so much more variety. You have of course already had a couple of tasters in the form of the singles ‘Watch It Die’ which really showcase’s Fish’s pipes and guitar work; and the slow simmer to sizzle of ‘Love Letters’, a song that seems to be built for the slow build and solo that burns at the end of it. Recorded at Royal Studios in Memphis and produced by three-time Grammy winner Scott Billington and mixed by two-time Grammy winner Steve Reynolds, Fish’s latest sounds great and if you wanted to pigeonhole it I guess then Blues and Roots is as close as we’ll get. Best of the lot just might be ‘You Got It Bad (Better Than You Ever Had)’ a wonderful blues rocker a song awash with guitars and sporting a chunky solo that hits the nail right on the head. There’s plenty of competition though, and variety too – the stylish Rhythm and Blues of ‘ Trying Not To Fall in Love With You’ sounds class to us, as does ‘She Don’t Live Here Anymore’ which has an even more pronounced Soul edge beneath the country guitar. Then there’s the punky proto-Rock and Roll of ‘Love Your Lies’ and right at the other end of the scale the gentle lilting country-tinged  ballad ‘Dream Girl.’ In truth though after repeated listens the Beatles-like opening to the gentle Blues of ‘Farewell My Fair Weather’ is just pipped by closer ‘You Got It Bad’ for line honours…

Kill or Be Kind