Tito & Tarantula - 8 Arms to Hold You 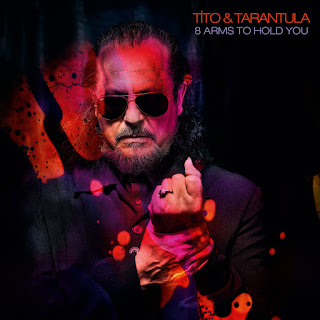 The long-awaited new studio album. For the recordings, Tito Larriva chose a studio near his hometown. He grew up in El Paso, Texas, and always wanted to record in this studio called Sonic Ranch, less than an hour away. He thought it would be fun to be near his dad while recording the new album. Larriva drew energy from his father, the desert, and all the magical moments he carries in his heart. From what he calls home. 8 Arms To Hold You captures the colors and smells of the desert, it's passionate and romantic. Along with Tito's electrifying vocals, another masterpiece in his long and successful career as a musician, composer, and actor. Tito & Tarantula is the US-American Chicano rock/blues rock band formed in Hollywood, California in 1992 by singer/songwriter/guitarist Tito Larriva, best known for its songs, "After Dark", "Back to the House That Love Built", "Strange Face of Love", and "Angry Cockroaches", as well as for its role in Robert Rodriguez's film From Dusk Till Dawn (1996) as the band performing at the Titty Twister nightclub. "After Dark" was the track played during Salma Hayek's iconic exotic dance scene in that film, and later became the theme for From Dusk Till Dawn.