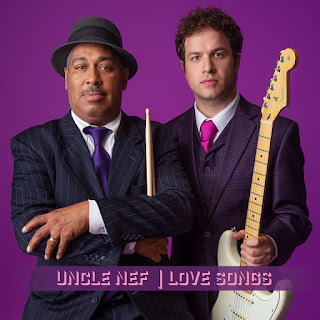 Uncle Nef is a rhythm and blues duo comprised of Shannon Powell and Darren Hoffman. Drummer Shannon Powell stands tall in the lineage of New Orleans’ rhythmic giants; he is a torchbearer of the city’s culture and one of the finest drummers in the world. He’s also a great singer, his vocals invoking styles that echo the churches, street parades and jazz clubs of his hometown. Known for his contributions to traditional and modern jazz idioms, having worked with Danny Barker, Harry Connick Jr. and Wynton Marsalis, Powell is also a veteran of New Orleans' rich rhythm and blues scene having backed up such greats as Snooks Eaglin, Earl King and Dr. John. Darren Hoffman is a multi-instrumentalist and music producer originally from Miami, Florida. He grew up playing guitar in his youth, greatly influenced by Jimi Hendrix, Albert King and Nirvana, but switched to drums when he was bit by the jazz bug in his early twenties and relocated in 2007 to study percussion at the University of New Orleans.  Hoffman began hanging out with Powell at places like Donna’s Bar & Grill on Rampart Street; the pair hit it off and began a friendship that ventured far from the classroom. While Shannon guided Darren in music and street-smart professionalism, Hoffman introduced Powell to new technologies and 21st century music industry practices. While many students of music today study almost entirely in the world of academia, Darren had the unique experience of being mentored by a living legend in a more traditional way, doing odd jobs and handling business for Shannon in exchange for knowledge and musical guidance. When Darren enrolled at UNO, he had all but forgotten the guitar, focusing on his career as a professional drummer. One afternoon in 2009, Darren pulled out his guitar and jammed through some blues tunes with Shannon. Taken aback by what he heard, Shannon proclaimed, “Man! We gotta record!” This chance riff resulted in the 2017 release simply entitled Blues, a stripped down interpretation of raw blues with a modern edge.
The success of that record led to a natural progression toward their new collaboration, Love Songs. Here we find Powell and Hoffman stretching out, but not relaxing at all. The mood is highly charged and powerful, with Powell hitting hard and Hoffman shredding like a chainsaw on razor wire. There are some subtle love songs on Love Songs, but many tracks that speak to the full experience of love - the energy, the tension, the elation and the agony. Classic tracks are included to keep the concept in context - Caledonia, St James Infirmary to name a couple - with originals both fun and frenzied mixed in. It’s a wonder to see this unlikely Uncle/Nephew duo chart new territory with full appreciation of the past.