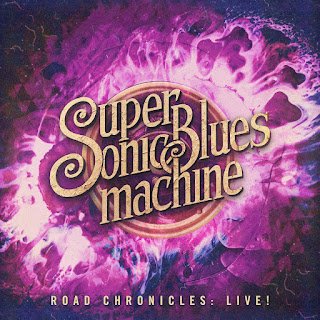 Supersonic Blues Machine may have slipped under the radar of casual rock fans, but most will have heard some of their members’ sounds and influences on other recordings. Drummer Kenny Aronoff and multi-instrumentalist and producer Fabrizio Grossi return with newcomer Kris Barras rounding out the core trio. On Road Chronicles: Live!, they select a few of their own live cuts, forming an album comprised of a few of the band’s originals and a couple of blues classics, capturing the energy and joy of great live blues rock.
“I’m Done Missing You” briefly flirts with reggae rhythm before quickly sliding into the thick rock sounds that form the tone of the album. Filled with lush amplified guitars and full voicings from the drums and backing vocals, Supersonic Blues Machine flex some sonic muscle. “I Ain’t Fallin’” is a solid song that also displays prominent backing vocals and pulsing blues harp.
“Remedy” may strike a resonant chord with Allman Brothers fans. The similar message and musical themes of “Soulshine” are audible here, which isn’t surprising considering that Warren Haynes had a pen in the inkwell on this tune. The dual guitars in unison towards the end of the instrumental break serve as the high point of the song, but the memorable lyrics and uplifting tone will likely be what goads listeners into hitting the repeat button. “Watchagonnado” departs from the preceding tunes, opting to get the funk out with a clavinet driven groove that works nicely with “Elevate” as the two offerings that push a bit outside of the blues rock base. On “Elevate,” backing vocals find their way forward, vying with heavy, spacey synths that quickly morph into throbbing guitars. However, nothing on this track compares to Aronoff’s drum break. The last six selections are passioned renditions of a few blues classics with some help from Billy Gibbons. Gibbons and Supersonic Blues Machine effortlessly meld together as if Gibbons were a full-time band member. This is far more cohesive than a standard pairing of band and guest musician. The biggest tonal difference lies in the exchange of Barras’ largely clean, but lived-in vocals for the unmistakable Gibbons growl. “Broken Heart” blends the Supersonic Blues Machine and ZZ Top sounds into a thumping rocker. “Running Whiskey,” concise and driving, is another candidate for multiple listenings. Road Chronicles closes with a version of “Going Down” that rivals that of the late Freddie King. Keys, harmonica, guitars, backing vocals….everyone gets to have a say on this one.
Road Chronicles: Live! is enjoyable and fun. The musicianship is masterful, never formulaic. The songs stretch enough for creative playing and ideas, but they don’t drag. Both the original pieces and the covers create a backbone for strong ventures into great modern blues rock. Sometimes the passion and spontaneity of great musicians can’t be fully expressed in a studio album. This live grouping should get listeners marking their calendars for the next time Supersonic Blues Machine comes to town.