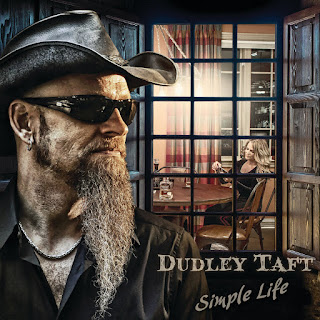 Clad in a black leather cowboy hat and sporting a long, pointed beard, Dudley Taft picks up his guitar, retrieves a pick from its headstock, and blazes through a collection of twelve tracks infused with rock n’ roll riffs, sonic textures and musical diversity. Taft’s new album Simple Life to be released on September 6 and will be available on vinyl, CD and digitally.
On his sixth full-length independent solo album, Simple Life the singer, songwriter, guitarist, and producer delivers contemplative songwriting between bouts of howling guitar and delicate delivery.  For the album, Taft enlisted the talents an all-star cast of musicians to round out the sound, including drummers Walfredo Reyes JR. [Santana, Chicago, Steve Winwood], Summer Rain collaborator Mike Taponga, and newcomer Chris Ellison. Kasey Williams laid down the bass with John Kessler making an appearance on the tracklisting’s sole cover, “If Heartaches Were Nickels,” originally by Warren Haynes.
“I’m enjoying the Simple Life right,” says Taft. “The songs are about being in love. It’s real. It’s natural. It’s me. It’s probably my most honest record. I freed myself from all of those self-imposed structures and allowed the music to happen.”
He introduces the record with the first single “Give Me A Song.” Upheld by a hummable riff and thick groove, the track struts towards a chantable chorus in between a spell of plainspoken poetry. “It’s lighthearted and fun musically,” he explains. “The verses are about my first terrible marriage before the joy of my new relationship. I want to be in love. I want what that first relationship should’ve been, and I got it.”
Meanwhile, the title track espouses the benefits of unplugging. Written on a trip to the Bahamas with his nose in a Michael Crichton book, “Simple Life” captures the essence of the record. “I was down in the Bahamas reading, and I thought, ‘Man, this is awesome,'” he recalls. “We get no reception unless we climb up on a hill, so it felt nice. Managing your digital self and this accelerated news cycle gets to be too much. I’m a city dude. I love visiting and living in cities, but at some point, your mind has an allergic reaction, and you need to decompress. That’s what this album is about.”
The distorted swells of “Pouring Down” and “Shine” conjure signature spirits Seattle with a fresh fire. The latter might even be “the happiest grunge song ever,” Taft laughs. Everything concludes with an organic jam on “Back to You.” It examines, “where you fuck up your relationship, and you want to get back to your happy place.”
Taft is serving notice that for all his years of experience, he is still a considerable force. The Midwest native went from co-founding Space Antelope alongside future Phish icon Trey Anastasio in high school to attending Berklee College of Music to founding Seattle staple Sweet Water. He joined Second Coming in 1997 and recorded the group’s seminal self-titled debut, which yielded the Top 10 hit “Vintage Eyes” and “Soft.” 2006 saw him kick off a successful solo career highlighted by a prolific string of releases: Left for Dead [2011], Deep Deep Blue [2013], Screaming in the Wind [2014] Skin and Bones [2015], and Summer Rain [2017]. In between canvasing the United States on tour, he enamored audiences across Europe. His impressive playing and intimate songcraft resounded around the globe with the European Blues Society nominating him for “Best Guitarist” in 2017.
A sought-after composer for film and television, he also contributed music to everything from the Academy Award-nominated classic The Sixth Sense and Prom Night to E! True Hollywood Story, Gene Simmons’ Family Jewels, Big Brother, and VH1’s That Metal Show, to name a few.
Taft is a thinking man’s rocker. There’s plenty of swagger here, but also the sensitivity of a thoughtful songwriter. (https://bluesrockreview.com/2019/08/dudley-taft-announces-simple-life.html)