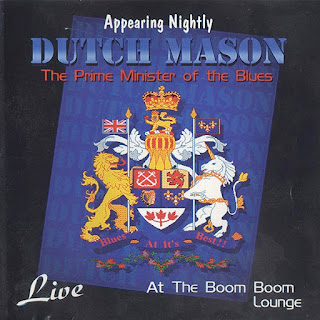 Notes: Recorded by Scrapper at the Boom Boom Lounge and other locations in the late '70s and early '80s. Also released as "Live" at an earlier date
Born: Norman Byron Mason February 19, 1938 in Lunenburg, Nova Scotia; Died: December 23, 2006
Called "Dutchie" because of his south-shore accent, the Lunenburg, Nova Scotia native was born into a musical family – his father played stand-up bass and drums while his mother was a pianist. At the age of 14 he played drums in his parents' Dixieland band. By the age of 16 he was hanging out with coloured musicians in the community of Gibson Woods and started to learn how to play guitar and immitate his musical heroes like Elvis Presley, Carl Perkins, Jerry Lee Lewis and others.
Mason's first band was called The Wreckers and soon stepped out front in Dutch Mason And The Esquires. By the age of 19 he hit the road doing dance hall performances around the Maritimes. As time went on he shifted from rock and roll to the Blues having been inspired by BB King's "Sweet Little Angel".
He was thirty years old when he recorded his first album, with the Dutch Mason Trio, entitled "At The Candlelight" which was released in 1968. The album was actually recorded at Dartmouth High School.
Later, with a newly formed Dutch Mason Band, the group took up residency as the house band at the Wyse Owl Tavern in Dartmouth, Nova Scotia. They played constantly from 1973 into 1974 for a 13 month run and were then offered gigs in Toronto where they decided to relocate. The band returned home in 1978.
Two albums followed on Attic Records before Mason was stricken with arthritis and diabetes complications that prevented him from recording for ten years.
Mason was appointed the title "Prime Minister Of The Blues" at a BB King concert in Toronto by King himself.
Mason finally returned to the recording studio in 1990 with an all-star cast of musicians from the Johnny Winter Band and Downchild Blues Band among others for his comeback record entitled, "I'm Back!", on Stony Plain Records.
In 1991 he appeared on the Juno Award-winning disc 'Saturday Night Blues: The Great Canadian Blues Project Volume 1' based on the CBC Radio show called "Saturday Night Blues". That same year, Mason won the 1st annual "Great Canadian Blues Award" voted by listeners of the CBC radio show.
A 1996 release, 'Appearing Nightly', came next and featured material recorded in 1980 while Mason was still able to play guitar.
For Mason's 60th birthday concert in 1998, promoter Brookes Diamond invited Mason's contemporaries Sam Moon, Joe Murphy, Frank MacKay And The Lincolns, Matt Minglewood, Pam Marsh, Johnny Favourite, Carson Downey And Big City and many others to the Halifax Metro Centre and recorded a tribute CD to the legendary bluesman.
In 2002 Mason was among the first inductees into the Canadian Jazz And Blues Hall of Fame. In 2004 the East Coast Blues Society held the inauguration of the Dutch Mason Blues Hall Of Fame at St. Antonio's Hall in Halifax.
On September 13, 2005 Mason received the Order Of Canada.
Mason has received several other accolades including the first 'Lifetime Acheivement Award' at the ECMA's, a Juno Award, and The Harvest Blues Festival in Fredericton has an award in his name.
Having lived the last few years in a wheelchair in Truro, Nova Scotia, while still doing occasional gigs, Mason passed away December 23, 2006.
Dutch Mason Trio: Dutch Mason (guitar, lead vocals); Ronnie Miller (bass); Ken Clattenburg (drums)
Dutch Mason Blues Band: Dutch Mason (guitar, lead vocals); Wade Brown (guitar); Rick Jeffery (harp; 1972-1987); Gary Blair (drums); Ken Pineo (drums); Gregg "Fish" Fancy (bass); Jack Jeffery (bass; 1972-1976); Donnie Muir
(keyboards); John Lee (piano); Terry Edmunds (guitar); Craig Roode (guitar); Carter Chaplin (guitar); Anslie Jardine (drums); Garrett Mason (guitar); Charlie Phillips (bass). 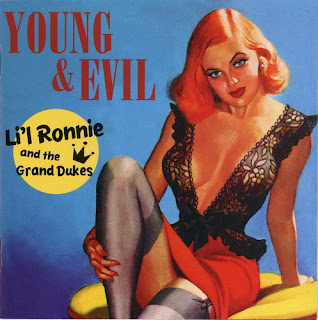 Hohner-endorsed harmonica player Li'l Ronnie follows up his critically acclaimed debut "Too Fast for Conditions" with more jump and swing blues, this time with special guest guitarist Anson Funderburgh joining the all-star Grand Dukes! This adds compelling star power to the proceedings. More super-fine roots influenced by 50's R&B, along with various styles of the blues, and rockabilly. Along the way, they mix in some soul, swamp rock and even a touch of jazz. Ronnie Owens takes his music very seriously; and man, are we glad he does. "?one of the best blues records you're likely to hear this year. Buck Naked da bomb-a guaranteed smash hit." -Jimmie Silvia.