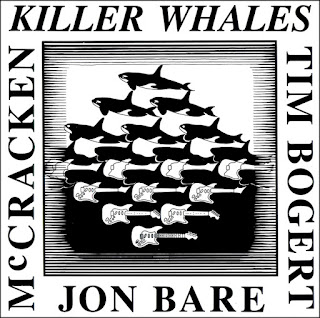 A rock power-trio with guitar virtuoso Jon Bare, master bassist Tim Bogert (Jeff Beck, Rod Stewart) and world-class drummer Chet McCracken (Doobie Brothers).
Jon Bare is a modern-day Renaissance man and a study in contrasts. Singer, songwriter, guitarist, producer, engineer, inventor, filmmaker, author and educator, Jon is the driving force behind the highly acclaimed KILLER WHALES, SHREDZILLA and ORCASTRA CD's.
Jon is a major player on the L.A. music scene. He has graced the stages of most of the major clubs and festival events in Southern California.
With an incredible band including former Doobie Brothers drummer Chet McCracken and former White Lion bassist James LoMenzo this band rocks with style and precision.
Jon has produced eight albums of his own music and has written a book and accompanying CD entitled "Recording The Electric Guitar," published in July, 2001 by Music Maker Publications, the publishers of RECORDING magazine. Jon is a contributing writer for the magazine, having authored more than 40 articles on recording and various aspects of the music business.
A native of Los Angeles, Jon plays guitar with a lot of skill and fire. His style has been described as Carlos Santana meets the Allman Brothers and they get in a fight.
The Killer Whales got their start back in 1993 with Tim Bogert (Jeff Beck, Vanilla Fudge) on bass and Chet McCracken (Doobie Brothers) on drums. The power trio's debut CD, entitled simply KILLER WHALES gained them national recognition and considerable press. Several cuts off that record found their way to a movie soundtrack, the cult fave "South Beach Academy."
On the follow-up CD, SHREDZILLA by Jon Bare & The Killer Whales, James LoMenzo (Ozzy Osbourne, White Lion) takes over on bass. This CD features some of the tastiest blues guitar playing in the Killer Whales catalog.
The new CD, ORCASTRA, is Jon Bare's SERGEANT PEPPERS. With the addition of The Killer Horns, Jon propels this band into areas previously uncharted - and the excitement of discovering new musical territory is easily discernible in the music.
Jon is the unofficial voice of www.wkrp.fm internet radio and has over 40 songs in rotation.
It is clear from the sound of Jon's recordings that he has a real love of the studio. To pursue his passion, Jon built a 1500 square-foot home studio, Bare Trax, where he has recorded his eight albums. It is a professional 24-track facility that he designed and built himself.