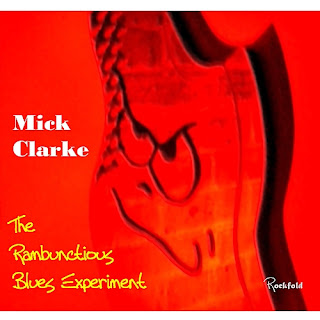 From Mick's liner notes:
"Produced at Fabulous Rockfold Studio, deep in the heart of the Surrey Badlands, this album is about as spontaneous a piece of music as I'm capable of producing. The tracks were not only recorded first take - There was also no rehearsal at all, minimal discussion as to what we were about to play, and some of the songs were written actually as they were recorded. I just gave Russ the drummer a count and off we went. He thought he'd only come over for a rehearsal - but he attacked his Yamaha kit with attitude and kicked ass all the way. There was some post production work - (I'm not completely mad), and Dangerous Dave came in to add some harp - personally I think it's some of his best work, absolutely superb playing.
Initially I intended to leave the album as just guitar, drums and harp.. why not? But I was subsequently persuaded that there was something missing down in the bottom end, so I clicked onto the internet and bought myself a cheap bass guitar. I added it myself, clunky and deliberately farty, and I think it works. Added a few bits of keyboard and some percussion - (Linda played maraccas on "Groundhog Man" - I filled in the bass end with a can of fish food). The guitar on the album is nearly all on my Danelectro 3022 - the vocals are mainly through an AC30. I've gone back over a few of my older songs.. "Slipaway" from the "All These Blues" album gets a garage treatment, "Shake That Boogie" goes back to the 50s and "Cheap" goes back to the swamp, where it always belonged.
All the thrills and spills are there - On "Woodsman" a string broke just before we commenced the take, but I decided to plough on with five strings. Through the song I kept hitting the pick up switch accidentally and so kept randomly changing tones, at one point switching the guitar off completely. It's all there.
So the result of all this.. well what do you think? It is undoubtedly real, and I think it has something going for it - a rawness which it would be difficult to capture using a normal, more sensible recording technique. Have a listen and judge for yourself.
Here y'are then - The Rambunctious Blues Experiment. Rambunctious, according to various dictionaries, means "Boisterous and disorderly - difficult to control ". Sounds about right."