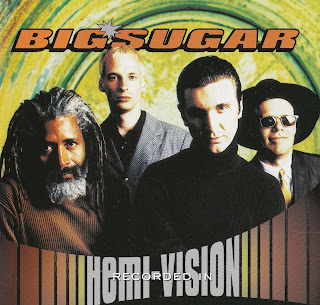 Hemi-Vision is the third album by Canadian blues-rock band Big Sugar. The album was nominated for Best Rock Album at the 1997 Juno Awards.The singles from the album were "Diggin' a Hole", "If I Had My Way", "Gone For Good" and "Opem Up Baby". The band also recorded a French language version of "Opem Up Baby", entitled "Ouvres-toi Bebe", for radio airplay in Quebec (see also Chauffe a bloc).
The album was recorded in six weeks at Presence Studios and Phase One Studios. According to Gordie Johnson, this was the first album that the band had recorded with an adequate budget, having $65,000 Canadian at their disposal. Johnson collaborated with several other songwriters for this album. "Gone for Good", "Empty Head", and "If I Had My Way" were co-written with Patrick Ballantyne; "La Stralla" and "Skull King" with Andrew Whiteman; "Tired All The Time" with bandmate Kelly Hoppe; "Opem Up Baby" with Dan Gallagher; "Tommy Johnson" with Dave Wall; and "Diggin' a Hole" with Gallagher and Andy Curran.
This track was labelled as "Opem Up Baby" on the CD cover, although both the lyrics and the French version, titled "Ouvres-toi bebe", indicate that the intended meaning was "open". It is not known if this was a spelling error on the cover art or an intentional use of artistic license, but both "Opem" and "Open" have been cited as the song's title by different reference works. The band's own website, however, uses the "opem" spelling, as does the 2003 greatest hits compilation Hit & Run, lending credence to the idea that it was intentional.