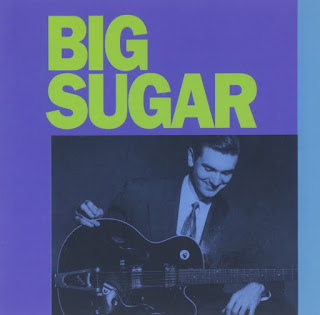 The eclectic Toronto blues-rock outfit Big Sugar was primarily the project of singer/guitarist Gordie Johnson, who teamed with bassist Terry Wilkins and drummer Al Cross to record the group's 1992 self-titled debut LP. By the time of 1993's Five Hundred Pounds, Wilkins was missing from the lineup; a number of guest musicians fleshed out the recording, among them multi-instrumentalist Kelly Hoppe, who (along with new bassist Garry Lowe) was installed as a permanent member by the 1995 EP Dear M.F. Drummer Walter "Crash" Morgan replaced Cross during Big Sugar's subsequent tour of the U.S.; sadly, while playing a date in Iowa, Morgan died onstage, and was replaced by ex-Odds drummer Paul Brennan in time for the 1996 release of Hemi-Vision. Gavin Brown then assumed Brennan's duties on 1998's Heated. The band remained busy in the 2000s, with albums like Brothers & Sisters, Are You Ready? ~ Jason Ankeny