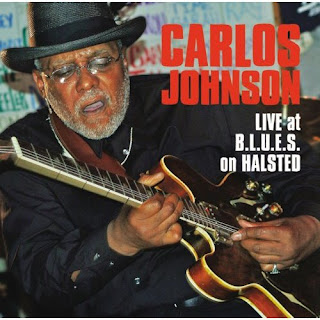 I got to B.L.U.E.S. on Halsted before the band started to insure my seat.
There it was at the corner of the bar closest to the stage.  The chrome legs didn’t meet the floor at the same time, and what little stuffing was left in the black cushion was being contained with silver duct tape.  It was perfect.  The keyboardist, Roosevelt “Hatt” Purifoy and his two keyboards decided not to try to compete for the very limited real estate on the stage riser.  I’ve seen many creative ways to fit musicians on this stage, but the one common appointment is the drummer on a higher riser in the back.  Pookie Styx, a very popular member of Chicago’s fine blues drummer fraternity, is tonight’s drummer.  His rhythm partner is the young Rob Bell.  The star of tonight’s show is Carlos Johnson.  Carlos plays his right-handed Gibson upside down, having to reach back up under his left arm to adjust his volume and tone knobs.  There is no pick involved and the well traveled guitar has a worn but warm finish that reflects the master’s posture.
Carlos starts by advising us that we can let or hair down, or take it off for that matter.  Feel free to take the band to the bar or the car.  Carlos sits against a stool, much like mine, but leans down to reach his microphone.  His voice is warm and engaging.  His rousing version or “Ain’t Nobody’s Business” featured every player in turn and caused more than a few party goers to re-open their tabs.
Carlos sometimes takes off in a jazzier direction with complete trust that Hatt will stay the song with the keys.  They have been playing together literally since childhood.  “I’ll Play the Blues for You” made famous by another lefty upside down player, featured a wonderful saxophone solo.  I know synthesizers can sometimes give a convincing horn blast, and some six stringers can conjure up a B-3 sound, but Hatt Purifoy had the sax nailed with his keyboard.  The attack, the envelope, timbre, sustain, and phrasing.
Carlos Johnson plays like Carlos Johnson.  He is a good showman and a very good singer.  I look forward to the next time our paths cross. It was standing room only so maybe I just didn’t see you there.  Don’t worry you can catch him soon in Lithuania and Italy (both Eastern suburbs of Chicago).  If you’re on a short leash be sure to see Carlos at Buddy Guy’s Legends on July 31.